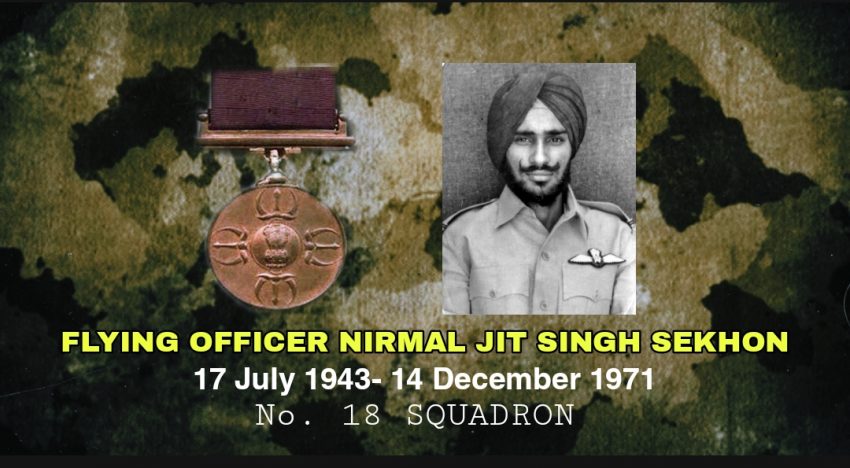 Flying Officer Nirmal Jit Singh Sekhon, PVC (17 July 1945 – 14 December 1971) was an officer of the Indian Air Force. He was posthumously awarded the Param Vir Chakra, India’s highest military decoration during war time, in recognition of his lone defence of Srinagar Air Base against a Pakistan Air Force (PAF) air raid during the Indo-Pakistani War of 1971. He is the only member of the Indian Air Force to be honoured with the PVC

Flying Officer Nirmal Jit Singh Sekhon was a pilot of a Gnat detachment based at Srinagar for the air defence of the valley against Pakistani air attacks. From the very outbreak of the hostilities he and his colleagues fought successive waves of intruding Pakistani aircraft with valour and determination, maintaining the high reputation of the Gnat aircraft. On 14 December 1971, Srinagar airfield was attacked by a wave of enemy Sabre aircraft. Flying Officer Sekhon was on readiness duty at the time. Immediately, however, no fewer than six enemy aircraft were overhead, and they began bombing and strafing the airfield. In spite of the mortal danger of attempting to take off during the attack, Flying Officer Sekhon took off and immediately engaged a pair of the attacking Sabres. In the fight that ensued, he secured hits on one aircraft and damaged another. By this time the other Sabre aircraft came to the aid of their hard-pressed companions and Flying Officer Sekhon’s Gnat was again outnumbered, this time by four to one.

Even though alone, Flying Officer Sekhon engaged the enemy in an unequal combat. In the fight that followed, at treetop height, he almost held his own, but was eventually overcome by the sheer weight of numbers. His aircraft was shot down by a gunfire of one of the Sabres and he was killed.

The sublime heroism, supreme gallantry, flying skill and determination above and beyond the call of duty displayed by Flying Officer Sekhon in the face of certain death have set new heights in Air Force traditions