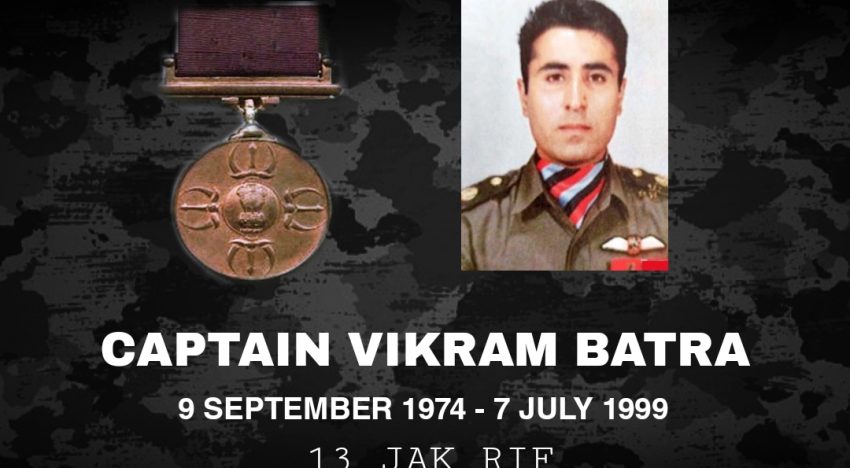 Captain Vikram Batra, PVC (9 September 1974 – 7 July 1999) was an officer of the Indian Army. He was posthumously awarded the Param Vir Chakra, India’s highest and most prestigious award for valour, for his actions during the 1999 Kargil War, during which he led one of the most difficult mountain warfare operations in Indian military history.

Batra was born on 9 September 1974, in a small town in Palampur, Himachal Pradesh. He was the third child of Girdhari Lal Batra, a government school principal, and Kamal Kanta Batra, a school teacher. He was the elder of twin sons, and was born fourteen minutes before his brother, named Vishal. The twins were nicknamed: ‘Luv‘ (Vikram) and ‘Kush‘ (Vishal)

Batra joined the Indian Military Academy (IMA) at Dehradun, in June 1996 in the Manekshaw Battalion. After completing his 19-month training course, he graduated from the IMA on 6 December 1997 and was commissioned as a lieutenant into the Indian Army. He was commissioned into the 13th battalion of the Jammu and Kashmir Rifles (13 JAK Rif). In mid-March 1998, he was sent to the Infantry School at Mhow, Madhya Pradesh, where young  Indian Army officers are trained, for the Young Officer’s Course. In January 1999, Batra was sent on a Commando Course at Belgaum, Karnataka where he excelled. The course lasted for two months and at the end of it, he was awarded the highest grading — the Instructor’s Grade.

Batra last came home on leave from the army in 1999, during the Holi festival for a few days. During that time, when he went to the café for a coffee, he met an acquaintance who told him to be careful in the war, to which Batra replied:

I’ll either come back after raising the Indian flag in victory or return wrapped in it. But I’ll come for sure.

The task of capturing Point 5140, a strategically important mountain peak in the Dras sector, was assigned to 13 JAK Rif under the command of Lieutenant Colonel Yogesh Kumar Joshi on 17 June 1999. Joshi decided to attack Point 5140 with Bravo Company, under the command of Lieutenant Sanjeev Singh Jamwal, and Delta Company, under the command of Lieutenant Vikram Batra, from two sides; East and South. At the Hump Complex, the two officers, Jamwal and Batra, received their briefing about the mission from Joshi. During the briefing, Jamwal chose the words “Oh! Yeah, yeah, yeah!” to be the success signal for his company whilst Batra chose the words “Yeh Dil Mange More!” (This heart wants more! — from a popular advertising slogan of Pepsi ) as his success signal for his company.

By 0315 hours, both B and D Companies had reached the vicinity of Point 5140 despite the treacherous terrain. B company reached the top of the feature first and assaulted from the left flank. By 0330 hours, B company had captured its objective, and at 0335 hours Jamwal radioed his command post, saying the words “Oh! Yeah, yeah, yeah!”

Batra decided to approach the hill from the rear, aiming to surprise the enemy, and to cut off their withdrawal route. Batra fired three rockets towards the bunkers on the east side of the feature, before attacking them. He and his men ascended the sheer rock-cliff, but as the group neared the top, the enemy pinned them on the face of the bare cliff with machine gun fire. Batra, along with five of his men, climbed up regardless and after reaching the top, hurled two grenades at the machine gun post. Batra then killed three enemy soldiers single-handedly in close combat. He was seriously injured in the process ,  but insisted on regrouping his men to continue with the mission. He continued to lead his troops, and then charged at the next enemy position, capturing Point 5140. In all its actions, his company killed at least eight Pakistani intruders and recovered a heavy anti-aircraft machine gun.  The remaining enemy soldiers fled. At 0435 hours, Batra radioed his command post, saying the words “Yeh dil mange more!”.

Captain Vikram Batra always leading from the front, and fully aware of the great danger of his mission, displayed unparalleled courage and determination in eliminating a Pakistani position at Ledge because he was aware of the importance of his task. His daring assault enabled the completion of the capture of Pt 4875 and this broke the will of the enemy. His courage and action were well beyond the call of duty and he continued to take risks ultimately making the supreme sacrifice in the finest traditions of the Indian Army.

Vikram Batra was awarded the Param Vir Chakra, India’s highest military honour on 15 August 1999, the 52nd anniversary of India’s independence. His father G.L. Batra received the honour for his deceased son from the President of India, the late K. R. Narayanan.

During ‘Operation Vijay’, on 20 June 1999, Captain Vikram Batra, Commander Delta Company was tasked to attack Point 5140. Captain Batra with his company skirted around the feature from the East and maintaining surprise reached within assaulting distance of the enemy. Captain Batra reorganized his column and motivated his men to physically assault the enemy positions. Leading from the front, he in a daredevil assault, pounced on the enemy and killed four of them in a hand-to hand fight. On 7 July 1999, in another operation in the area Pt 4875, his company was tasked to clear a narrow feature with sharp cuttings on either side and heavily fortified enemy defences that covered the only approach to it. For speedy operation, Captain Batra assaulted the enemy position along a narrow ridge and engaged the enemy in a fierce hand –to-hand fight and killed five enemy soldiers at point blank range. Despite sustaining grave injuries, he crawled towards the enemy and hurled grenades clearing the position with utter disregard to his personal safety, leading from the front, he rallied his men and pressed on the attack and achieved a near impossible military task in the face of heavy enemy fire. The officer, however, succumbed to his injuries. Inspired by his daredevil act, his troops fell upon the enemy with vengeance, annihilated them and captured Point 4875.

Captain Vikram Batra, thus, displayed the most conspicuous personal bravery and leadership of the highest order in the face of the enemy and made the supreme sacrifice in the highest traditions of the Indian Army.