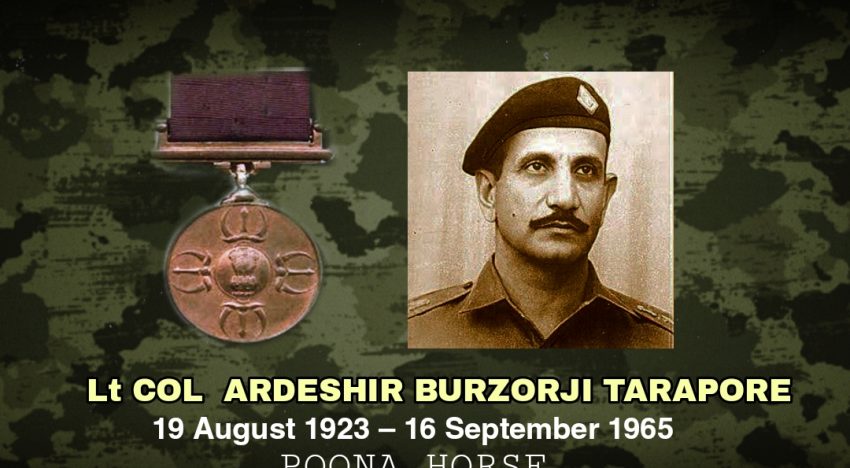 Lieutenant Colonel Ardeshir Burzorji Tarapore, PVC (19 August 1923 – 16 September 1965), was an officer in the Indian Army and a recipient of the Param Vir Chakra, India’s highest award for bravery for his actions in Phillora. Popularly known as “Adi”, Ardeshir Tarapore was unhappy joining the infantry, as he wanted to join an armoured regiment. When his battalion was being inspected by Major General Syed Ahmed El Edroos, then Commander-in-Chief of the Hyderabad state forces, a live grenade accidentally fell into a bay area during a live-ammunition training exercise. Tarapore quickly picked it up and threw it away. The grenade exploded mid-air inflicting shrapnel wounds to his chest. Major General Edroos witnessed his actions and was impressed. He summoned Tarapore to his office and congratulated him. Tarapore took the opportunity to request a transfer to an armoured regiment. The general agreed and transferred him to the 1st Hyderabad Imperial Service Lancers.

Beginning in April 1965, India and Pakistan engaged in a series of skirmishes across the Line of Control (LOC). In August, Pakistan attempted mass infiltration into Kashmir in Operation Gibraltar. On 5 August, Pakistani soldiers crossed the LOC dressed as Kashmiri locals, heading for various areas within Kashmir. After locals reported the presence of Pakistani troops, the Indian Army captured several disguised Pakistani soldiers and foiled the infiltration operation. On 1 September, Pakistan launched a counterattack, named Operation Grand Slam, to capture vital points that would cut off supply routes to Indian troops. This plan eventually was foiled by the Indian troops. Later on 6 September, Indian forces crossed the Radcliffe Line, marking the official beginning of the Indo-Pakistani War of 1965.

On 11 September 1965 Poona Horse launched an attack on Phillora. To surprise the

Pakistanis, it was decided to attack Phillora from the rear. As part of the regiment, commanded by Lieutenant Colonel Tarapore, was attacking Phillora from  Chawinda, it encountered Pakistani armour advancing from Wazirwali. Tarapore held his ground and attacked Phillora under enemy tank and artillery fire. When wounded he refused to be evacuated. His regiment successfully captured Wazirwali on 14 September. On the 16th they advanced to capture Jassoran, supported by 9 Dogra, and Butur-Dograndi, supported by 8 Garhwal. In the latter battle his tank was hit several times. Tarapore was mortally wounded, and succumbed to his injuries. Under his leadership the regiment had destroyed sixty Pakistani tanks, while the Indians had suffered the loss of nine

On 11 September 1965, the Poona Horse regiment under the command of Lieutenant Colonel Ardeshir Burzarji Tarapore was assigned the task of delivering the main armored thrust for capturing Phillora in the Sialkot Sector in Pakistan. As a preliminary to making a surprise attack on Phillora from the rear, the regiment was thrusting between Phillora and Chawinda when it was suddenly counterattacked by the enemy’s heavy Armour from Wazirali. Lieutenant Colonel A. B. Tarapore who was then at the head of his regiment, defied the enemy’s charge, held his ground and gallantly attacked Philloira with one of his squadrons supported by an infantry battalion. Though under continuous enemy tank and artillery fire, Lieutenant Colonel A. B. Tarapore remained unperturbed throughout this action and when wounded refused to be evacuated. Inspired by his leadership, the regiment fiercely attacked the enemy heavy armour destroying approximately 60 enemy tanks at a cost of only 9 tank casualties, and when Lieutenant Colonel A. B Tarapore was mortally wounded the regiment continue to defy the enemy. The valour displayed by Lieutenant Colonel A.B. Tarapore in this heroic action, which lasted six days, was in keeping with the highest traditions of the Indian Army.