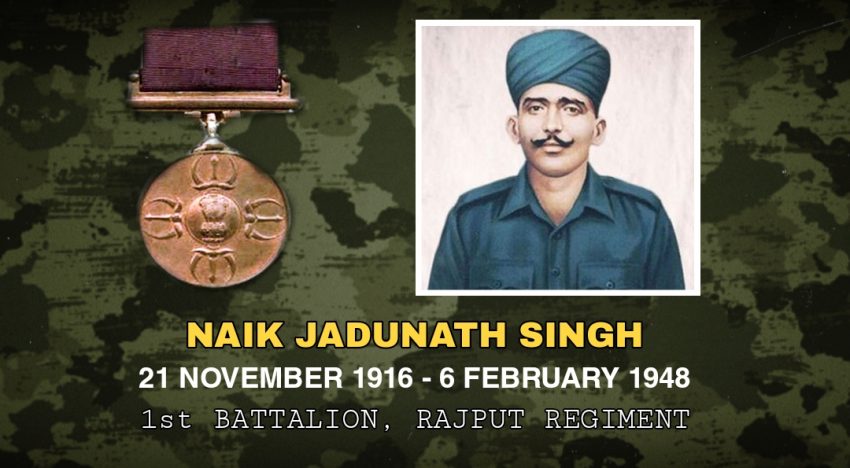 The British Indian Army enrolled J.D. Singh in 1941. During World War II, he fought against the Japanese forces in Burma. One of the highlights of his life was his participation in the Indo-Pakistani War of 1947 as an Indian Army soldier. Naik Singh was posthumously given the Param Vir Chakra on 6 February 1948 in Tain Dhar, north of Naushahra, for his contributions to the cause of freedom.

In the front sector, Singh was in charge of a nine-man squadron. However, despite the fact that Singh’s troops were outnumbered by the advancing Pakistani forces, they managed to hold the entrenched position against three attempts to capture it. During the second attack, he sustained injuries. So fiercely rushed the third assailant with his Sten pistol, that the attackers were forced to retreat. As a result of his actions, he was assassinated. As a tribute to Singh, a sports facility and a crude oil tanker in Shahjahanpur bear his name.

During the Second World War, Singh enlisted in the 7th Rajput Regiment of the British Indian Army, on 21 November 1941 at Fatehgarh Regimental Centre. On completing his training, Singh was posted to the regiment’s 1st Battalion. During late 1942, the battalion was deployed to the Arakan Province during the Burma campaign, where they fought against the Japanese. The battalion was part of the 47th Indian Infantry Brigade, assigned to the 14th Indian Infantry Division. It fought actions around the Mayu Range in late 1942 and early 1943, advancing up the Mayu Peninsula towards Donbaik as part of an operation to recapture Akyab Island. Although the Rajputs were held up around the cluster of villages called Kondan in December 1942, the advance slowly continued towards Donbaik. It was there, where the brigade’s attack ground to a halt and they were subsequently relieved by the 55th Indian Infantry Brigade in early February 1943. In early April, the Japanese counterattacked. The 47th Brigade became cut off around Indan and eventually split off into small groups to fight their way back to Allied lines. The surviving members of the brigade returned to India. In 1945, Singh’s battalion was assigned to the 2nd Indian Infantry Brigade and took over the defence of the Andaman and Nicobar Islands. The islands had been partially occupied by the Japanese forces, which surrendered on 7 October 1945. After returning to India, Singh was promoted to the rank of Naik (corporal). After the partition, the 7th Rajput Regiment was assigned to the Indian Army. Singh remained with the newly raised Indian regiment, continuing to serve in its 1st Battalion.

Param Vir Chakra
Singh was posthumously awarded the India’s highest military decoration, the Param Vir Chakra for his actions on 6 February 1948. The official citation is as follows:

At No 2 picquet on Taindhar on 6 February 1948, No 27373 Naik Jadunath Singh was in command of a forward section post, which bore the full brunt of the enemy attack. Nine men against overwhelming odds garrisoned the little post. The enemy launched its attack in successive waves and with great ferocity to overcome this post. The first wave swept up to the post in a furious attack. Displaying great valour and superb qualities of leadership Naik Jadunath Singh so used the small force at his disposal that the enemy retired in utter confusion. Four of his men were wounded but Naik Jadunath Singh again showed his qualities of good leadership by reorganising the battered force under him, for meeting another onslaught. His coolness and courage were of such an order that the men rallied and were ready for the second attack which came with greater determination and in larger number than the preceding one. Though hopelessly outnumbered, this post under the gallant leadership of Naik Jadunath Singh resisted. All were wounded, and Naik Jadunath Singh, though wounded in the right arm, personally took over the Bren gun from the wounded Bren gunner. The enemy was right on the walls of the post but Naik Jadunath Singh once again showed outstanding ability and valour of the highest order in action. By his complete disregard for his personal safety and example of coolness and courage, he encouraged his men to fight. His fire was so devastating, that what looked like impending defeat was turned into a victory and the enemy retreated in chaos leaving the dead and wounded littered on the ground. With this act of supreme heroism and outstanding example of leadership and determination, Naik Jadunath Singh saved the post from the second assault. By this time, all men in the post were casualties. The enemy put in his third and final attack in undiminished numbers and determination to capture this post. Naik Jadunath Singh, now wounded, prepared literally single-handed to give battle for the third time. With great courage and determination, he came out of the sangar and finally with the Sten gun, made a most magnificent single-handed charge on the advancing enemy, who, completely taken by surprise, fled in disorder. Naik Jadunath Singh, however, met his gallant death in his third and last charge when two bullets hit him in the head and chest. Thus, charging single-handedly at the advancing enemy, this Non-Commissioned Officer, performed the highest act of gallantry and self-sacrifice and by so doing saved his section-nay, his whole picquet from being overrun by the enemy at the most critical stage in the battle for the defence of Nushera.

On 28 Oct 1947, India officially declared that it would help J & K against the attack of Pakistan after Maharaja Hari Singh of Kashmir formally decided to merge with India. Pakistan made simultaneous attacks on many fronts and Taindhar was one such front in Naushera sector. It had great importance for the enemy as it could have paved the way for them to take over the control of Srinagar airfield. On 01 Feb 1948, India’s 50 Para brigade attacked Naushera and gained control over it. Pakistani soldiers suffered heavy casualties and had to retreat.

On 6th Feb 1948, the enemy began the attack on this sector by opening fire on the pickets of Taindhar ridge. The whole ridge and surrounding hills were under gunfire and mortar fire. Meanwhile, in the cover of darkness, the enemy made their way to the Indian pickets. The dawn of 6th Feb saw successive attacks by the enemy to capture the post.

Naik Jadunath Singh, who commanded the picket No.2 displayed remarkable valor and profound leadership. With his small force, he managed to make the enemy retreat in confusion. In the attack, four of his men were injured, and he re-organized the forces for another attack. Despite being outnumbered and injured, his forces continued guarding their post. When his Bren-gunner was injured, he personally took over the Bren-gun. The enemy emerged for another attack, this time right on the walls of the post. But his offense was so strong that he turned what looked like defeat into a victory and saved the post a second time.

By this point, he had lost all the men of his post. The enemy launched a third attack to capture the post. Naik Jadunath Singh charged the enemy with his sten gun, despite being alone and wounded. The enemy, surprised by this daredevilry fled in disorder. During this exchange, two enemy bullets pierced his head and chest and Naik Jadunath Singh was martyred. At such a critical stage for Naushera, he saved his picket and was honoured with the nation’s highest gallantry award, “Param Vir Chakra” for his outstanding bravery, unyielding fighting spirit and self-sacrifice for the nation.

The Shipping Corporation of India (SCI), an Indian Government enterprise under the Ministry of Shipping, named fifteen of her crude oil tankers in honour of the Param Vir Chakra recipients. The crude oil tanker named MT Naik Jadunath Singh, PVC was delivered to SCI on 21 September 1984. The tanker was phased out after 25 years of service. A sports stadium in Shahjahanpur, the town near the village where Singh was born, was named as “Paramveer Chakra Lance Nayak Jadunath Singh Sports Stadium” in his honour.