What Group Captain Samrath Dhankar, the demo pilot of India’s indigenously-developed Tejas Mk 1, thought would be a touch and go on the fighter’s unique strengths, with the Malaysian PM, turned out to be longish and st

imulating one. Dr Mahathir was specially drawn to the neatness of the cockpit and the intuitive layout. The discussion lasted for 10 mins, with Dhankar even adding a personal flavor by telling the PM he had been to Malaysia before, under a defence exchange programme.

These little personal stories, cultural affinities, historical connects, and high-profile, increased military exercises between the two nations, however, do not weigh in bigger than the one fact which most geo political and defence experts speak about, anonymously: and that is; Malaysia’s tilt towards Pakistan.

So, where does India’s locally-made fighter which got widely applauded for its agility and maneuverability at the LIMA show held last week of March, stand vis-à-vis Pakistan’s JF-17 and Korea’s FA-50 Golden Eagle?

Dhankar’s confidence comes from the fighter’s superior technology and its ability to be customized as per Malaysia’s requirements. Talking to Times of India at Langkawi’s LIMA flightline, Dhankar said, “The RMAF (Royal Malaysian Air Force) officials appeared really happy as the aircraft far exceeded their expectations. Clearly, we are not selling a product here but a capability in itself.”

Dhankar said, ‘The jet’s fly-by-wire capability, air-to-air refueling, the avionics that have been wonderfully-integrated and the open architecture computer systems, where both Russian and Western weaponry can be assimilated, are all unique and demarcates Tejas as a different generation fighter.”

Defence Attache in the Indian High Commission, Malaysia, Aniruddh Chauhan, who has been instrumental in bringing Tejas to LIMA 2019, added, “Both India and Malaysia share this common military strategy of using both Russian as well as NATO weapons systems and Tejas has been built to make it adaptable to both.”

Malaysia has planned a two-stage procurement and in this two-stage process, RMAF wants to fill up the entire gap from the lead in fighter trainer, up to the medium range combat aircraft (MRCA). India is past the RFI stage, which is Request for Information, followed by RFP (Request for Proposal) which will be carried out only after Pakistan and South Korea also clear the RFI.

It is interesting to note that HAL, considering Malaysian interest in Tejas, gave out a little more elaborate information than required, for RFI stage, but lower than RFP round.

Pakistan’s JF-17, which is built on Chinese design and technology, did not show up in LIMA. Meanwhile pro-Pakistan media plugs seemed to have taken over the narrative here, after Tejas’s impressive show, claiming Malaysia would buy two JF-17 for ‘evaluation.’

Mr Dzirhan Mahadzir, a seasoned freelance writer on defence matters and geo-political issues in South East Asia, debunks this claim. “No fighter jets are purchased only for evaluation.”

Talking about both India and Pakistan’s aggressive bidding, Mahadzir said while India is reportedly dealing on a strict government to government basis, lobbyists for Pakistan are at work to get the nod for JF-17.

Capt (Rtd) Martin A Sebastian, Senior Fellow and Centre Head, Centre for Maritime Security and Diplomacy, Malaysia, said, “The advantage with Tejas is there’s scope for not just transfer of India’s indigenous technology but also transform; this deal, if comes through, can help identify and build Malaysia’s own indigenous capacity in defence production.” 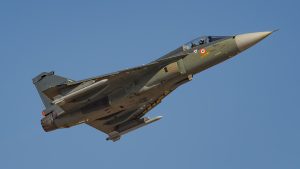