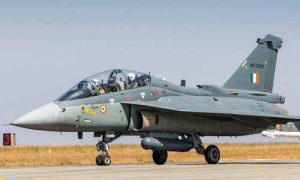 The Intermediate Jet trainer project was grounded due to design flaws and crashes. The Intermediate Jet Trainer (IJT) aircraft project which had been in cold storage for the last few years following a series of mishaps is once again on track as aircraft took to the skies here on Wednesday.

The indigenous IJT programme which was initiated by the Hindustan Aeronautics Limited (HAL) in the early 2000’s to replace the Indian Air Force’s (IAF) aging Kiran trainer fleet is among the most delayed aircraft projects in the country.

Though the IJT first flew in 2003 it is still nowhere near induction in the IAF after nearly 16 years due to design flaws which also led to a few crashes while the aircraft was being  flight tested.

However Wednesday’s flight is a positive development in the IJT programme as the aircraft flew following extensive modifications.

HAL sources confirmed that the flight got airborne after it was grounded for a long time.

“The IJT took to the skies after a long time. It was routine sortie as the pilots got the aircraft airborne. No major tests or maneuvers were done during the flight,” HAL sources told Bangalore Mirror.

The IJT programme was initiated in 1999 and two prototypes of the aircraft were built subsequently.

However a couple of mishaps involving the prototypes became a major setback for the IJT programme.

The IJT took to the skies after a long time. It was a routine sortie as the pilots got the aircraft airborne. No major tests or manoeuvres were done during the flight

During the Aero India 2007, an IJT swerved of the runway at the Air Force Station Yelahanka after its canopy opened just as the pilot was getting airborne.

In April 2011 another prototype version of the aircraft met with a mishap in Krishnagiri District, Tamil Nadu during a test sortie.

The flight test was conducted as part of the IJT‘s pursuit to attain the Initial Operational Clearance (IOC) before its induction into the IAF.

However after this mishap the IJT programme was put in the backburner.