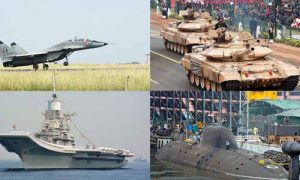 Even as Washington is wooing New Delhi, India is seeking to buy Russian-made military hardware. The most recent deal would see the purchase of more than 450 tanks from Moscow for $1.93 billion, and it’s not even the biggest one.

The purchase of 464 T-90MS main battle tanks, approved last week, will further expand the large stock of Russian-designed and manufactured weapons in India’s arsenal. The country is one of the primary customers for Moscow’s arms.

Another, even more significant contract – worth $5.43 billion – was signed last October, when India ordered five S-400 anti-aircraft missile systems. Delivery is expected by 2020.

The cutting-edge air defense system is capable of intercepting and destroying targets at a distance of up to 400 kilometers and can engage up to six targets simultaneously. India has signaled it would go ahead with the purchase regardless of the US laws seeking to sanction any country that buys Russian military hardware.

India already has over 1,000 T-90 tanks of various types. Since the early 2000s, the country has operated Т-90S Bhishma tanks, designed specifically to meet India’s needs. Some of the machines have been manufactured in Russia, while others were assembled locally out of Russian-made assembly kits.

Apart from the T-90S, India has purchased a number of T-90Ms – an upgraded iteration of the tank. In fact, India has significantly more T-90s in service than Russia itself, as well as a number of the older T-72 tanks.

The Indian Air Force operates a wide selection of Russian-made airplanes as well, including a hundred or so MiG-21s. Though the supersonic fighter first flew in the late 1950s, don’t let their age fool you: the latest upgraded model – known as MiG-21UPG Bison – can actually go toe to toe with 4th-generation fighters. The aircraft is suitable for gaining air superiority, as well as for ground attack missions.

Aircraft of this type were involved in the recent flare-up between India and Pakistan – and at least one of them was shot down. India claimed that a Bison managed to shoot down a US-made Pakistani F-16 jet, yet failed to provide any solid proof. Islamabad, on its part, vehemently denies the loss and involvement of F-16s in the conflict.

Among the more modern Russian jets in Indian service are over 200 Sukhoi Su-30MKI multirole fighters, designed specifically to meet the country’s demands – the ‘I’ stands for Indian – and the carrier-based MiG-29K fighters.

While the desire to build a homegrown navy has been a priority for New Delhi, much of it still consists of vessels built overseas. One of its few nuclear-powered submarines is INS Chakra, which is actually a Russian vessel (known as Akula-class in NATO classification). The ship was leased to the Indian Navy for ten years back in 2012. As the contract is about to expire, New Delhi is eyeing the lease of another submarine of the same class.

India’s flagship, aircraft carrier INS Vikramaditya, is a refitted Soviet-era aircraft-carrying missile cruiser. The vessel was sold to India in early 2010s and remains the only ship of its type. The Indian Navy’s first home-built carrier INS Vikrant is under construction in Kerala, with an expected commission date in 2021.