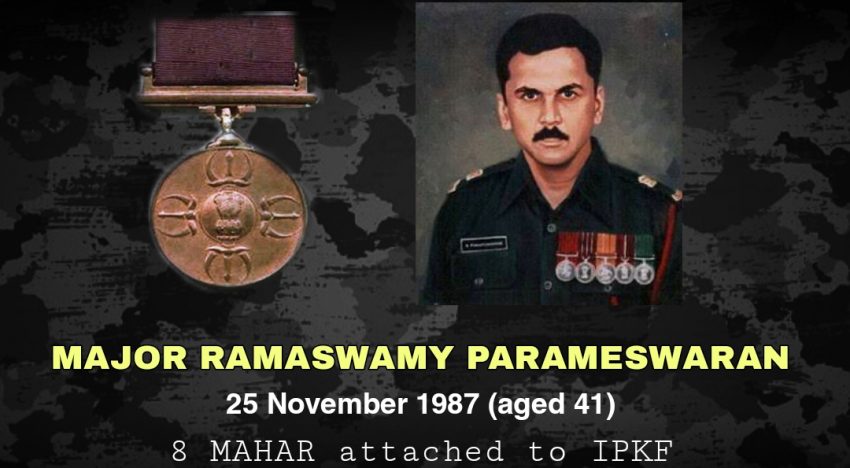 Major Ramaswamy Parameswaran, PVC (13 September 1946 – 25 November 1987) was an Officer of the Indian Army who was awarded the Param Vir Chakra, India’s highest military decoration, for his bravery. Major Parameswaran’s unit was part of 54 Infantry Division that was tasked to oversee the implementation of Indo-Sri Lanka accord signed on 29 July 1987. After the induction of Indian forces in Aug 1987, the militants were supposed to surrender but the dreaded LTTE backed out and unleashed war on Indian forces. On late night of 25 Nov 1987, Maj Parameswaran was tasked to lead a team of soldiers for a search mission in Kantharodai near Uduvil in Jaffna, the stronghold of LTTE. When they were on the way to locate a consignment of weapons in the hideout of LTTE militants, a group of heavily armed LTTE militants attacked them. Major Parameswaran and his team of about 30 soldiers had inadvertently walked into the militants’ hideout and were  facing heavy firing from all directions.

The militants were using AK-47s, grenades, explosives and the deadly HMGs(Heavy Machine Guns) that inflicted heavy damage. The LTTE cadres had even mined the area that restricted the movement of the soldiers, who were totally at a disadvantage. he quickly assessed the gravity of the situation and decided to launch a counter-ambush to save his soldiers. He took 10 of his men and moved forward to put his plan into action. In the face of incessant fire form HMGs , he fought back ferociously and continued to surround the militants. With no concern for his own safety, He dropped on his stomach and continued to crawl forward through the coconut grove in the direction of the ambush.

He startled the militants when they realized that they had been surrounded. But then an HMG burst from a sniper sitting atop a coconut tree caught him on his left wrist, nearly severing his hand. Undeterred, he charged at the militant closest to him, snatching his weapon and shooting him down. However just then another HMG burst hit him in the chest. In his pocket he was carrying a Mini Clear pistol and its rounds to use it for sending a success signal. They burst with the HMG hit and he collapsed on the ground and was martyred. His soldiers though shocked by the loss of their gritty commander got inspired and succeeded in beating back the militants.

He was given the nation’s highest gallantry award, “Param Vir Chakra” for his cold courage, indomitable fighting spirit and supreme sacrifice. He became the sole recipient of PVC award from the IPKF operation in Sri Lanka and the first from OTA Chennai to get the coveted award.

On 25 November 1987, when Major Ramaswamy Parameswaran was returning from search operation in Sri Lanka, late at night, his column was ambushed by a group of militants. With cool presence of mind, he encircled the militants from the rear and charged into them, taking them completely surprise. During the hand-to-hand combat, a militant shot him in the chest. Undaunted, Major Parameswaran snatched the rifle from the militant and shot him dead. Gravely wounded, he continued to give orders and inspired his command till he breathed his last. Five militants were killed and three rifles and two rocket launchers were recovered and the ambush was cleared.

Major Ramaswamy Parameswaran displayed the most conspicuous gallantry and thought nothing of dying at his post.