Captain Keishing Clifford Nongrum, MVC (7 March 1975 – 1 July 1999) was an Indian Army officer of 12 Jammu and Kashmir Light Infantry, who was posthumously awarded the Maha Vir Chakra, India’s second-highest gallantry award, for exemplary valor in combat during operations in the Kargil War in 1999. 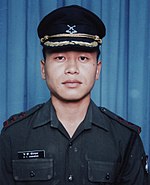 He grew up in a Christian home in Shillong, Meghalaya. Father Keishing Peter works at SBI, mother Saily Nongrum is a homemaker.

Nongrum graduated from Shillong’s Don Bosco Technical School and St. Anthony’s College. He was a talented student who excelled in both academics and athletics. The 12th battalion of the Jammu and Kashmir Light Infantry

At the outbreak of war, his battalion was posted to the Batalik sector. The mission was assigned to 12 JAK LI on 30 June 1999 to capture the strategically important Point 4812 in the Batalik sector. He was tasked to lead the assault team for this critical mission. Capt Nongrum was awarded the Mahavir Chakra for his gallant action in this operation.

12 JAMMU AND KASHMIR LIGHT INFANTRYOn the night of 30 June/1 July 1999, in the operations to capture Point 4812 in the Batalik Sector, Captain Keishing Clifford Nongrum was tasked to assault the feature from the southeastern direction. Captain Keishing Clifford Nongrum led his column over the near impossible vertical feature. On reaching the top, his column encountered strong enemy opposition. The enemy was well entrenched in interconnected bunkers, carved out of boulders, and remained invulnerable to even artillery fire.

The enemy pinned down the column of Captain Keishing Clifford Nongrum with heavy and accurate automatic fire for about two hours. On seeing the futility of own fire against the fortified enemy position, Captain Keishing Nongrum, with utter disregard to his personal safety, charged through the fire zone. Closing in with the first position, he threw grenades into it and killed six enemy soldiers. He then tried to snatch the universal machine gun of the enemy from the second enemy position and received a volley of bullets.

Captain Keishing Clifford Nongrum displayed conspicuous bravery, dogged determination and raw courage in the face of the enemy and made the supreme sacrifice in the highest traditions of the Indian Army.