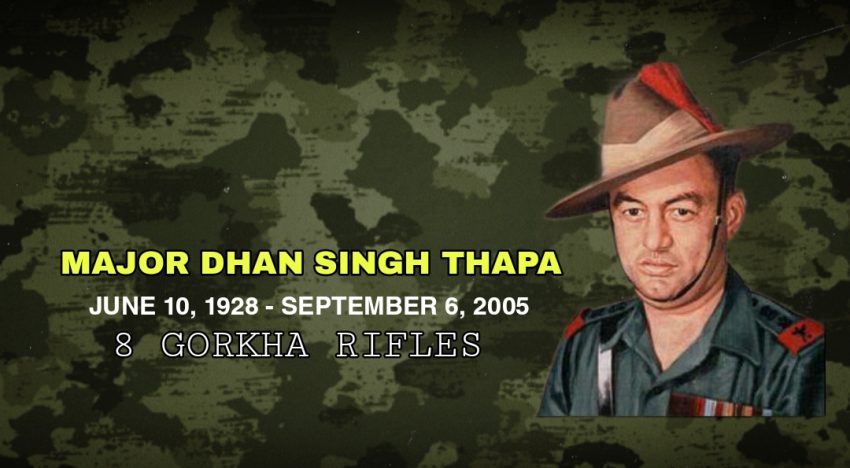 Lieutenant Colonel Dhan Singh Thapa, PVC (10 April 1928 – 6 September 2005) was an Indian Army officer and the recipient of India’s highest military award, the Param Vir Chakra. Thapa was commissioned in 1949 as a member of the 1st Battalion, 8 Gorkha Rifles.

The Sino-Indian War began in October 1962, when the Chinese pushed north of Pangong Lake in pursuit of Sirijap and Yula. Srijap 1 was a station erected on the northern bank of Pangong Lake by Major Dhan Singh Thapa’s 1st Battalion of 8 Gorkha Rifles. Soon after, the station was encircled by Chinese soldiers that were more heavily equipped. Major Thapa and his troops defended the position for three days and withstood three raids before being overwhelmed. The surviving, including Thapa, were interned as POWs. He was decorated with the Param Vir Chakra for his gallantry and attempts to encourage his soldiers while under fire.

Thapa was released from captivity after the war ended. Following retirement from the Army, he worked for a brief period with Sahara Airlines. He died on 6 September 2005.

There had been long disagreement between India and China over disputed borders in the Himalaya region. To counter the increasing Chinese intrusions into disputed territory, then Prime Minister of India Jawaharlal Nehru approved a plan called the “Forward Policy”, which called for the establishment of a number of small posts facing the Chinese.

On the night of 19–20 October 1962, they attacked the eastern sector of the Indian defences. The same night they assaulted and overran the posts at Galwan, Chip Chap, and Pangong areas of Ladakh. On 21 October, they advanced to north of Pangong Lake, with the objective of capturing Sirijap and Yula.

For his gallantry actions on 20 October 1962, Major Thapa was awarded the Param Vir Chakra. The award citation read:

Major Dhan Singh Thapa was in command of a forward post in Ladakh. On 20 October it was attacked by the Chinese in overwhelming strength after being subjected to intensive artillery and mortar bombardment. Under his gallant command, the greatly outnumbered post repulsed the attack, inflicting heavy casualties on the aggressors. The enemy attacked again in greater numbers after heavy shelling by artillery and mortar fire. Under the leadership of Major Thapa, his men repulsed this attack also with heavy losses to the enemy. The Chinese attacked for the third time, now with tanks to support the infantry. The post had already suffered large numbers of casualties in the earlier two attacks. Though considerably reduced in number it held out to the last. When it was finally overrun by overwhelming numbers of the enemy, Major Thapa got out of his trench and killed several of the enemy in hand-to-hand fighting before he was finally overpowered by Chinese soldiers. Major Thapa’s cool courage, conspicuous fighting qualities and leadership were in the highest traditions of our Army.

Later life
Thapa was promoted to the substantive rank of major on 21 February 1964, and to lieutenant-colonel on 28 February 1970. He retired from the Army on 30 April 1980. Post-retirement, Thapa settled down in Lucknow, and served for a brief period as a director with Sahara Airlines. On 6 September 2005, Thapa died. He was survived by his wife, Shukla Thapa, and three children.