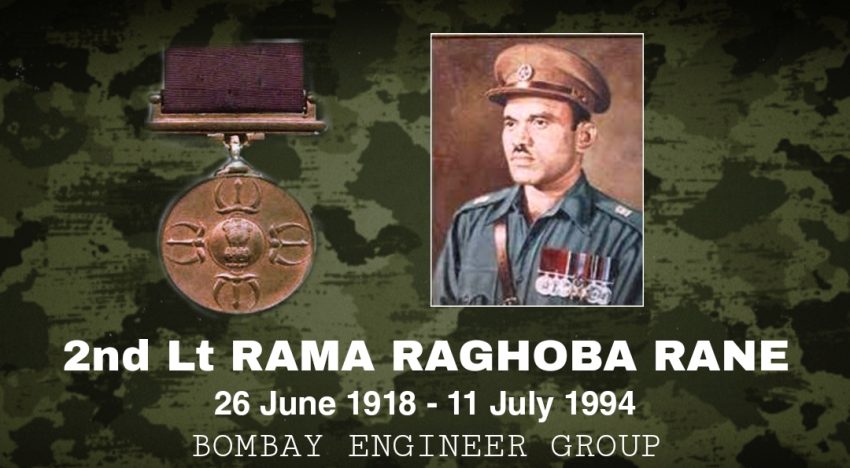 Rane was born in 1918 and fought in World War II with the British Indian Army. He continued in the military after the war and was commissioned on 15 December 1947 into the Bombay Sappers Regiment of the Indian Army’s Corps of Engineers. Rane was important in the conquest of Rajauri by Indian forces in April 1948, during the 1947 Indo-Pakistani War. He cleared several obstacles and minefields. His activities aided in the clearance of the path for Indian tanks to advance. On 8 April 1948, he was posthumously awarded the Param Vir Chakra for valour. He left the Indian Army in 1968 with the rank of major. He was named in despatches five times throughout his 28-year military career. 76 years old, he died in 1994.

At the age of 22, Rane decided to join the British Indian Army, while the Second World War was in full swing. On 10 July 1940, Rane enlisted in the Bombay Engineer Regiment, and passed out as the “Best Recruit”, awarded the Commandant’s Cane. Subsequently, he was promoted to Naik (corporal).

After his training, Rane was posted to the 28th Field Company, an engineering unit of the 26th Infantry Division which, at the time, was fighting the Japanese in Burma. As his division retreated from the Japanese after the failed Arakan Campaign, he, along with his two sections, was hand-picked by his company commander to stay back behind at Buthidaung to destroy key assets and then be evacuated by the Royal Indian Navy. Though the objective was soon achieved, the expected pickup did not happen. This forced Rane and his men to cross a river that was patrolled by the Japanese to reach their lines. Rane, along with his two sections, expertly evaded the Japanese troops, and joined the 26th Infantry Division at Bahri. For his actions, he was promoted to havaldar (sergeant)

Rane later received a Viceroy’s Commission as a jemadar (now the rank of naib subedar, equivalent to a warrant officer). For his persistence and leadership qualities, Rane was selected for a short-service commission prior to the partition. In 1947, following his country’s independence, Rane remained in the new Indian Army and was commissioned in the Corps of Engineers on 15 December 1947 as a second lieutenant (seniority from 14 January 1948).

Main article: Indo-Pakistani War of 1947
On 18 March 1948, Jhangar, lost in December 1947 to the Pakistanis, was recaptured by troops of the Indian Army, which then started to move towards Rajauri from Naushahra sector. On 8 April 1948, the 4th Dogra Battalion advanced to Rajauri. During the advance, the battalion attacked and captured the Barwali ridge, eleven kilometers to the north of Naushahra. The battalion’s advance beyond Barwali was obstructed by the increasing number of roadblocks and minefields. Supporting tanks were also unable to cross the obstacles.

Rane, in command of a section of the 37th Assault Field Company, attached to the 4th Dogra Battalion, was sent forward to help clear a path for the battalion. As Rane and his team started clearing a minefield, mortar fire from the Pakistanis killed two sappers and wounded five others, including Rane. Despite this, by the evening of 8 April, Rane and his surviving men cleared the minefield which enabled the supporting tanks to move forward. A safe lane still had to be prepared for the tanks as the road ahead was still dangerous; the Pakistani forces had yet to be cleared from the area. This lane was created by Rane through the night. The next day, his section worked for twelve continuous hours to clear mines and roadblocks. As the road was still too difficult to deal with, he made a diversion for the battalion to forward. Rane continued this work despite ongoing artillery and mortar fire from the Pakistanis.

On 10 April, Rane got up early and resumed work on an obstacle that had not been cleared the previous night. Within a span of two hours, he cleared the roadblock of five large pine trees in the midst of mines and machine-gun fire. This allowed the 4th Dogra Battalion to advance another thirteen kilometers until it encountered another major roadblock. The Pakistani forces were situated on the adjoining hills and able to fire on all approaches to the block, making its destruction problematic. Rane drove a tank to the roadblock and took cover behind the tank while blasting open the roadblock with mines, opening the road before the end of the night.

The next day, Rane worked for another seventeen hours to open the road to Chingas, which lay half-way between Rajauri and Naushahra on an old Mughal route, and beyond. During the period from 8 to 11 April, he had made a significant contribution in the Indian advance to Rajauri. His work not only cost the Pakistani forces about 500 dead and many more wounded, but also saved many civilians in the area from Chingas and Rajauri.

The Shipping Corporation of India (SCI), a Government of India enterprise under the aegis of the Ministry of Shipping, named fifteen of her crude oil tankers in honour of the Param Vir Chakra recipients. The crude oil tanker named MT Lieutenant Rama Raghoba Rane, PVC was delivered to SCI on 8 August 1984. The tanker was phased out after 25 years service.

A statue in Rane’s memory was unveiled in a ceremony on 7 November 2006 in his hometown Karwar at Rabindranath Tagore beach, Karnataka, alongside INS Chapal Warship Museum. It was inaugurated by Shivanand Naik, former Minister for Small Industries, and presided over then Flag Officer Commander-in-Chief, Western Command, Vice Admiral Sangram Singh Byce.