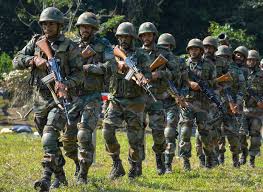 The facility was withdrawn by the government in 2017 and it started paying a certain amount in instead of the ration to defence personnel.

The government has restored the provision of ‘ration in kind’ to military officers in peace areas, a defence official said on Tuesday.

Welfare of the armed forces have been one of the top priorities of Singh and he has very clearly conveyed it to the senior officials of the Defence Ministry, sources added.

“Raksha Mantri Rajnath Singh, today announced (Tuesday) the restoration of the ‘ration in kind’ for the officers of the three Armed Forces posted in peace areas.

The facility was withdrawn by the government in 2017 after the implementation of the seventh pay commission.

The provision for the officers, however, continued in the field area. The facility of ‘ration in kind’ also continued for jawans and Junior Commissioned Officers (JCOs).

The defence officers in peace areas were paid Rs 96 as ‘ration money allowance’ instead of the ration. The money was directly credited to their account.

There was also a demand to raise the ration money allowance but that did not happen.

The decision to withdraw the provision of ‘ration in kind’ had met with criticism from several quarters within the three services of the armed forces.

There was also a strong demand to rescind the decision that had further increased the wedge between bureaucracy and military. The suspension of ration in kind had also created administrative difficulties.

Last month, a letter issued by Quarter General Branch of the Army stated that serving and retired officers of the Indian defence forces will not be able to buy cars above Rs 12 lakh from the subsidised CSD (Canteen Stores Department) from June 1, as per new rules.

Only vehicles with engine capacity up to 2,500 CC and costing up to Rs 12 lakh (excluding GST) will be available through CSD, the order stated.