In order to equip the Indian Army in fighting insurgency, government decided to roll out Ghatak Platoon to make the infantry more effective. Ghatak Platoon, or Ghatak Commandos, is a special operations capable 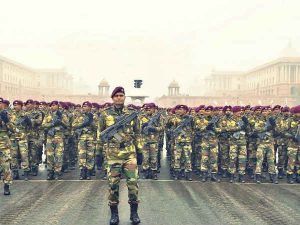 Their role is to act as shock troops and conduct assaults against enemy positions, usually without support from the rest of the battalion. Their operational role is similar to Scout Sniper Platoon, STA platoon of the USMC and the Patrols platoon of the British Army.

They can be tasked by the battalion or brigade commander to carry out tasks such as special reconnaissance, raids on enemy artillery positions, airfields, supply dumps and tactical headquarters. They are also capable of directing artillery and air attacks on targets deep within enemy lines.

A Ghatak Platoon is usually 20-men strong, consisting of a commanding Captain, 2 non-commissioned officers and some special teams like marksman and spotter pairs, light machine gunners, medic and radio operator. The remaining soldiers act as assault troopers. The most physically fit and motivated soldiers in an infantry battalion are selected to be a part of the Ghatak Platoon.

Members of the platoon are also sent to the High Altitude Warfare School and Counterinsurgency and Jungle Warfare School. However, most of them are not parachute qualified. It is mandatory for all infantry officers to pass the Commando Training Course. These units are equipped with the Tavor TAR-21, INSAS or a version of the AK-47 as their primary assault rifle.

The marksmen are equipped with the Dragunov SVD rifle and Heckler & Koch MSG-90 sniper rifles. They wear standard issue camouflage and body armour. Depending on the mission, they may carry other items like ropes, climbing gear, grenades, rocket launchers, laser target designators and night vision equipment.

Some of the equipment for the special forces are manufactured indigenously by the Indian Ordnance Factories controlled by the Ordnance Factories Board, Ministry of Defence, Government of India while other items are obtained from foreign suppliers.

A deal worth $ 5.75 million was signed with M/S B&T Switzerland for the acquisition of 1,568 advanced sub-machine guns for the Ghatak platoons of infantry battalions.

Additionally, door breaching ammunition and non-lethal systems like stun grenades and ballistic shields are being procured for counter-insurgency operations.