Minimum number of featured posts is 4.
Home Personalities Start Ups Rise Hydroponics – Why this agritech startup believes hydroponics is the future of farming 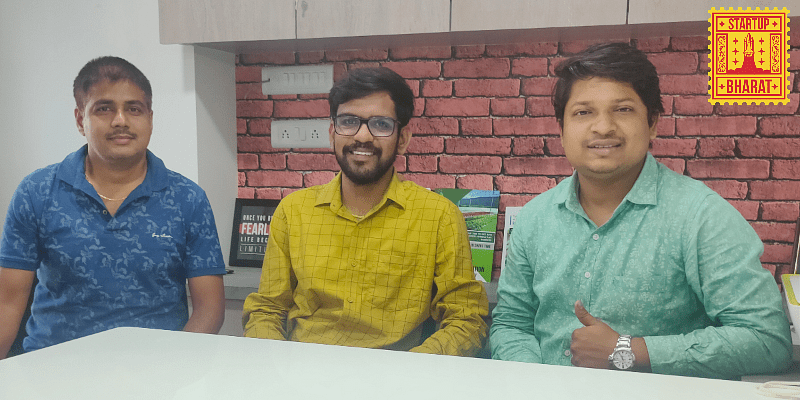 Rise Hydroponics – While soilless agritech farming – also known as hydroponics – has piqued urban farmers’ interest in recent years, the concept is not new. According to legend, the Hanging Gardens of Babylon, one of the Ancient World’s Seven Wonders, were hydroponically grown!

Startups are now assisting farmers in doing the same thing – eschewing soil in favour of a nutrient-rich solution – and reaping abundant yields. Among them is Ahmedabad-based agritech startup Rise Hydroponics, founded by Tusshar Aggarwal, Meet Patel, and Vivek Shukla in April 2020.

Rise Hydroponics offers comprehensive soilless farming solutions and is actively involved in the development of both outdoor and indoor hydroponics farm projects.
Tusshar says the team was introduced to the technology three to four years ago and began exploring the idea of “ensuring the growth of nutritious crops while reducing India’s reliance on exotic crops.”

According to the co-founders, one of the major advantages of hydroponic farming is that crops can be grown year-round under controlled conditions and temperatures.

“Our main objective with Rise Hydroponics is to empower farmers and make agriculture a profitable asset. We are also looking to reduce and stop the import of exotic crops, and ensure availability of healthy nutritious crops to meet the rising demand for food with increasing population,” Vivek says.

Soilless farming, or hydroponics, is still in its infancy in India but is gaining popularity. The co-founders explained that plants are grown in this system without soil, either in a liquid nutrient solution made up of essential plant nutrients and water, or in moist inert materials such as Rockwool and Vermiculite.

The bootstrapped startup assists farmers in setting up infrastructure, educating them about the technology, and teaching them how to manage it. Meet adds that the startup also provides farmers with structures and nutrients.

While there are several methods used in hydroponic agriculture, Vivek explains that the most common is NFT (nutrient film technique), in which the nutrient solution flows continuously beneath the plant roots.

According to the co-founders, hydroponics ensures higher productivity than traditional methods of agriculture because plant nutrients are effectively absorbed and utilized. As the nutrient-rich solution is applied to the plants, one can exert control and provide the specific nutrients required by each plant.

Additionally, plants can easily absorb water directly, resulting in increased utilization. This technique allows for the cultivation of plants in a controlled environment, which protects them from harmful pests. Additionally, it eliminates the need for excessive chemical and pesticide use.

“Rise Hydroponics is assisting farmers in gaining an understanding of the technology, assisting in the development of infrastructure, guiding them through the technique, and also teaching them how to manage it,” Tusshar explains.

Vivek explains that this technique can be used to grow any crop, but care must be taken to ensure viability. Rise Hydroponics specializes in growing exotic plants such as lettuce, basil, thyme, oregano, and rosemary.

“We also ensure IoT-based automation of the farms to help farmers and workers access the condition of the crops real-time using a web dashboard,” Tusshar adds.

Additionally, Rise Hydroponics is involved with indoor and rooftop farms. The startup asserted that it had constructed a 12,000+ square foot commercial hydroponics farm in Bhiwandi, which is expected to open soon. Apart from that, it has established an indoor vertical hydroponics farm in Mumbai’s Worli neighbourhood.

Rise Hydroponics asserts that it has completed more than 20 projects in 13 cities, including Ahmedabad, Vadodara, Surat, Gurugram, and Jamnagar.

According to the team, project costs vary significantly depending on the process used, the materials required, the area involved, and the type of crops grown.

According to a report by DataM Intelligence, the India Hydroponics Market is expected to expand at a 13.53 percent compound annual growth rate from 2020 to 2027. Similarly to Rise Hydroponics, Gurugram-based Barton Breeze also specializes in hydroponic farm construction. Eekifoods, a Kota-based agritech startup, also uses hydroponics to grow high-quality exotic vegetables.

Tusshar discusses the company’s future plans, stating that it is looking to raise funds in the next six to eight months in order to further scale up its operations and open farms in multiple cities across India. Additionally, the agritech startup is eyeing international markets such as Canada and Abu Dhabi.

“We are looking to expand our offices, hire to increase team size, invest in research and development, and execute on our plan to open company-owned farms in eight to ten major cities across India over the next year to year and a half,” Tusshar says.