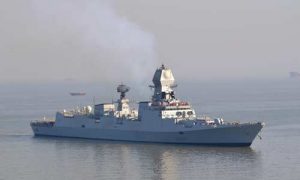 Two Indian battle ships, including the biggest indigenously built stealth destroyer INS Kolkata, have arrived at the port city of Qingdao to take part in the Chinese Navy’s fleet review while the Pakistan naval ships will be conspicuous by their absence at the event.

INS Kolkata, which is the first of a new class of three destroyers built by India, is accompanied by tanker INS Shakti, a fleet support ship, to take part in the event.

However, PLAN’s naval fleet review will be held without the ships from its closest ally Pakistan.

Though there is no official announcement, official sources told PTI that no Pakistan ships are expected to take part in the fleet review. Instead, Pakistan navy will be represented by a high-level delegation at the Qingdao celebrations being held from April 21-26.

Besides being an all-weather ally of China, Pakistan is the biggest procurer of Chinese weapons systems. China is currently building four most advanced naval frigates for Pakistan.

INS Kolkata is commanded by Captain Aditya Hara. It is equipped with the latest weapons including the supersonic Brahmos missiles and sensors. It is capable of simultaneously engaging multiple threats from the air, sea and underwater.

INS Shakti is commanded by Captain Sriram Amur and its role is to provide fuel, provisions and munitions to warships whilst underway at sea. 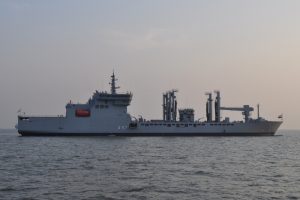 Both ships are capable of operating large helicopters for tasks such as anti-submarine warfare and search and rescue.

More than 60 countries will send delegations to join multinational naval events marking the anniversary and over 30 countries of them will send major navy leaders, PLAN’s senior navy officer Qiu Yanpeng told a press conference at Qingdao on Saturday.

Observers say international naval fleet reviews are generally meant for showcasing each country’s modern naval ships. For its part, China which is expanding its navy to increase its strategic presence around the world, will deploy its modern ships including the aircraft carrier.

The first aircraft carrier, the Liaoning, and latest nuclear submarines, destroyers and fighter jets will be among the 32 Chinese vessels and 39 warplanes to be displayed in the parade, Yanpeng said.

“Some vessels will make their debut for the first time,” he added.

Captain Aditya Hara, on asked about their arrival through the Taiwan Strait, said the ships did pass through it and that the transit was made in accordance with the international law and Chinese ships were present in the Strait to offer assistance for a safe passage.

Answering a question about the relations between Indian and Chinese navies, considering the border tensions, Captain Hara said that the ocean is a common heritage of mankind and that the PLAN and the Indian Navy have healthy professional interaction in this matter.

The Indian ships’ last port of call was Cam Ranh Bay, Vietnam, where they conducted a bilateral exercise with the Vietnam Navy reflecting on close defence ties between India and Vietnam.

The ships’ crews will not only participate in planning and executing the parade at sea but will also meet separately for experience sharing, an Indian Embassy press release said here.

On the cultural front, the Indian Naval band, embarked on the ships, will give a performance at the iconic May 4th Square in Qingdao.

Sports activities will include basketball, tug of war, table tennis and a Sampan boat race. The ships will also be open to the general public, including the local Indian community, providing a unique opportunity for direct engagement with the people of Qingdao, it said.

After Qingdao, the next port of call for the India ships is Busan, South Korea, where they will participate in the ADMM Plus Maritime Exercise.

Participation by the Indian Navy in the PLA Navy’s fleet review is part of the efforts towards deepening the military-to-military relations between India and China, which is in keeping with the strategic guidance provided by the leaders of both countries, it said.

The PLA Navy was represented at the Rear Admiral-level at the Indian Ocean Naval Symposium (IONS) 10th anniversary celebrations in Kochi in November last year. Besides these high level engagements, there have also been professional interactions at the mid and junior officers’ levels. These include the army joint training exercise “Hand-in-Hand”, and participation by PLA Navy cadets in the Admiral’s Cup Regatta at the Indian Naval Academy, it said. 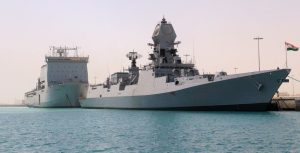