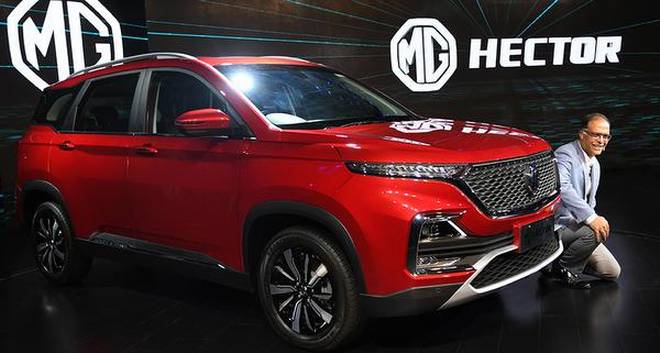 MG’s capacity addition by 50 per cent comes even as the broader industry is struggling to clamber out of a protracted slowdown.

MG Motor, a new entrant in the competitive Indian car market, is adding a second shift at its plant from next month to help deliver the sales of 40,000 Hector SUVs car in India for which confirmed bookings have already been made. MG’s capacity addition by 50% comes even as the broader industry is struggling to clamber out of a protracted slowdown.

Owned by China’s SAIC Motor, the British brand had earlier stopped taking bookings for its maiden product in India after receiving over 28,000 orders, with the waiting period for deliveries exceeding well beyond 2019. It resumed taking orders for the SUV late last month and increased its price by 2.5% on average across variants.

“We’ve been able to get the confidence that our suppliers will be able to meet our additional requirements of parts and basis this confirmation, we will start the second shift from November onward,” Gaurav Gupta, chief commercial officer at MG Motor India, told ET. “Based on that timeline, we resumed taking orders.”

With a second shift, production will be increased to 3,000 units a month from 2,000 at present, Gupta said. The company sold about 6,100 units of the Hector during the three-month period ending September. Adding an extra shift will also lead to fresh hiring by the company at a time when many of its local rivals have been compelled to let go of their temporary workforce due to weak demand.

The Indian passenger vehicles market has witnessed a sales slowdown for a year now, with even entry-level car sales falling dramatically. Yet, most of MG’s customers are opting for higher-end variants of the Hector, priced around Rs 17.5 lakh on-road, said Gupta.

Buyers are increasingly opting for petrol-engine variants over diesel for the full-sized SUV, he said, especially in the urban areas. The current petrol-diesel sales mix for the company is 50-50.

MG Motor is going to stick with its plan of launching four SUVs in the Indian market within a span of 28 months starting July 2019, Gupta said. To cater to its increasing customer base, the company is looking to double the number of its touchpoints, including sales outlets and service stations, to 250 by the end of 2019 from 120 at present.

To maintain profitability of its dealers even as it brings more products, MG Motor has ensured assigning only one dealer principal to a city to prevent in-competition among its dealerships. Competition among dealers of the same brand in a city and the ensuing discounts to lure customers are the leading causes for profit erosion, ET reported earlier.