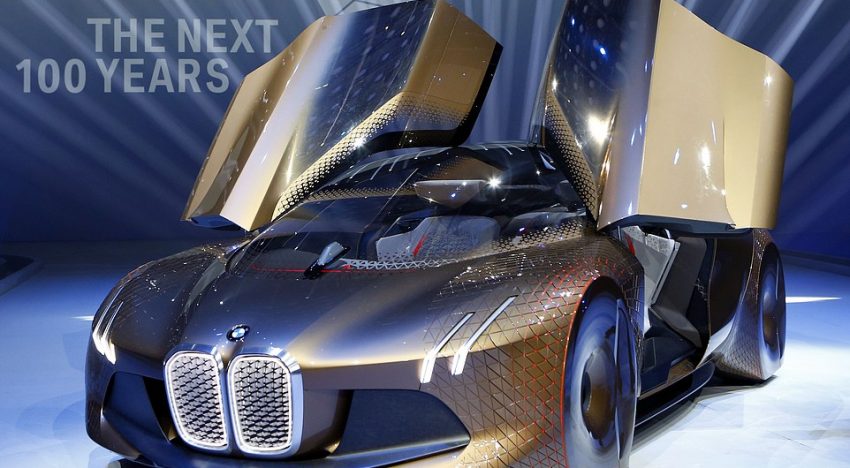 BMW AG is hinting at plans for a new driving-oriented sports coupe with the introduction of the Vision M Next, a low-slung, sweeping, two-door plug-in hybrid concept that previews the brand’s design and technology roadmap.

The Vision M Next is the yin to BMW’s Vision iNext concept’s yang that debuted in September.

Whereas the iNext concept was an incubator of hands-free autonomous driving technologies, the M Next is a decidedly hands-on driving experience.

“The BMW Vision M Next provides a glimpse into the future of sporty driving,” BMW Group design boss Adrian van Hooydonk said in a statement. It “demonstrates how state-of-the-art technology can … make the experience of driving yourself purer and more emotionally engaging,” Hooydonk said.

The M Next’s wedge-shaped silhouette and gullwing doors hint at its BMW i8 DNA.

The front design is a modern riff on classic BMW icons — the kidney grille and four-eyed front end. Large air intakes and a front spoiler made from recycled carbon bring a race-car aesthetic. The outer curves of the kidney grille openings are reminiscent of a turbine’s air intake.

The M Next headlights are positioned on the outer edges of the front end, higher up than the kidney grille. The headlights feature what BMW refers to as laser wire lighting technology. Glass fibers coated with phosphorous produce headlight elements with a super-slim form.

The 600 hp plug-in hybrid offers a choice of electric all-wheel drive and pure rear-wheel drive, with either all-electric propulsion or the power of a turbocharged four-cylinder gasoline engine. The concept is capable of 62 miles of battery-electric driving and can sprint from 0 to 62 mph in 3 seconds. A “Boost+” mode delivers extra power at the push of a button.

Like any self-respecting concept, the Vision M Next is brimming with tomorrow’s technology and materials.

Facial recognition technology allows the car to unlock automatically as the driver approaches. The minimalist interior appears as if cut from a single mold, with functional elements such as the air vents integrated and almost out of sight.

The horizontally arranged steering wheel features two small displays. A curved glass display stretches around the steering wheel like a visor. Adding to that is an “augmented reality head-up display” in the windshield.

As the vehicle speeds up, the information centers increasingly on driving-related data and moves into the driver’s eye-line, BMW said.