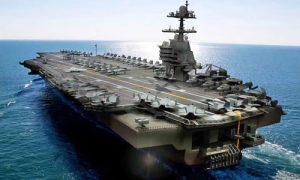 An aircraft carrier is a warship that serves as a seagoing airbase, equipped with a full-length flight deck and facilities for carrying, arming, deploying, and recovering aircraft. It allows a naval force that owns a carrier to project air power worldwide without depending on local bases for staging aircraft operations.

Aircraft carriers are expensive to build and are very critical assets. They are extremely vulnerable due to their large size and hence are escorted by various surface and sub-surface vessels like Destroyers, Cruisers, Frigates, Submarines and supply ships that defend the carrier in the event of a threat. The combination of these warships moving along with an aircraft carrier in open-seas is known as an ‘Aircraft Carrier Battle Group’.

Regardless of size, the carrier itself must house their complement of aircraft, with space for launching, storing, and maintaining them. Space is also required to house a large crew, supplies (food, ammunition, fuel, engineering parts), and propulsion.

Now let’s come to the point and understand why Pakistan will never own or afford to build and operate an Aircraft Carrier.

Pakistan’s Gross Domestic Product is valued at $ 275 bn according to the World Bank and United Nations 2016 report.
India’s economy ($ 2.25 trillion) is roughly nine times larger than Pakistan’s. At current respective growth rates, within ten years it will be nearly twenty times as large.

With horrendous poverty and national debt, coupled with radical Islamic extremism, Pakistan is one of the most under-developed country in the world. It has a failing government that is not in control of its army and security apparatus and vengeance seeking terrorist groups like the Taliban, Al-Qaida, Lashkar-E-Toiba and much more.

Radical Islamic Extremism, terror attacks, suicide bombers and a weak economy is not the only threat that Pakistan faces today. One of the main threat that the country faces is a population boom that cannot be supported by its economy anymore.

In a region that is poised to witness the fastest rate of economic growth in the world, a new World Bank report has placed Pakistan at the bottom of the eight economies in South Asia, projecting a moderate growth rate of 4.3% in 2015, the second-lowest after Afghanistan. In 2016, Afghanistan is set to overtake Pakistan in GDP growth rate which will make Pakistan the worst performing economy in Asia.

Pakistan’s population currently stands at 194 million people. It is the sixth most populous country and one of the worst performing economies of the world. The fertility rate in Pakistan currently stands at an average of 3.5 children per woman which means that Pakistan’s population will double in the next 12 to 15 years to 360 – 370 million people but it’s economy will not. Tackling large scale unemployment of a population that has not seen anything but an Islamic Madrasa will be the most daunting task of the future govt. of Pakistan.

Construction cost of designing & developing a 44,500 ton carrier will be close to $6.5 bn. Deploying approximately 24 fighter jets on the carrier will cost an additional $4 bn taking the total to $10.5 bn just to construct the carrier and purchase the fighter jets. The country’s total defense budget for the year 2016-17 stands $ 8 bn which is 2.5 billion dollars lesser than the cost of an aircraft carrier. Pakistan will have to spend a whopping 4% of its entire GDP just to build and deploy one aircraft carrier in today’s date.

& last but not the least

With almost no technical skills to design and develop state-of-the-art warships, the country is totally dependent on foreign assistance, especially China to expand its Navy. Karachi Shipyard of Pakistan is the only yard that has ever built a warship in Pakistan but with foreign assistance.

Constructing an aircraft carrier requires three important things.
a. An indigenous metal and steel industry capable of producing high grade steel to withstand extreme pressures of the sheer weight of the carrier.
b. Ship-building infrastructure and availability of technically qualified manpower like engineers who can design and develop an extremely complex warship like an aircraft carrier.
c. A strong economy that can support and fund up to $10 bn in acquiring an aircraft carrier and more funds to operate it.

In the case of Pakistan, none of the above mentioned points are even existent to fulfill their dream.

The per day cost incurred to India for operating one aircraft carrier is approximately Rs. 11 crores which is roughly 1.7 million dollars. This includes, fuel, ration, and salaries to nearly 1500 to 2000 sailors on-board the carrier. If the carrier is on active deterrent patrol for 300 days in a year then the total cost of operating just the carrier and not other warships that escort the mother-ship would be approximately half a billion dollars.

Conclusion ::
Aircraft Carriers are symbols of national pride that can traverse oceans with unmatched firepower, capable of waging a war, effectively forcing a naval blockade and attaining air, surface and sub-surface superiority.

Induction and existence of Aircraft Carriers are necessary in a nations arsenal in order for it to be recognized at least as a regional naval power.

With the induction of new conventional and nuclear-submarines, stealth missile destroyers like the INS Kochi and INS Kolkata, construction of additional aircraft carriers along with over 50 warships under construction, India is soon to realise the dream of being recognized as a true blue water navy that will dominate the Indian Ocean for years to come.

Pakistan will have to achieve double digit GDP growth rates and sustain it for years which seems pretty impossible to own and operate an Aircraft Carrier to challenge India’s naval supremacy. The only other way is, if Pakistan receives an Aircraft Carrier in AID from China considering Pakistan’s track record of begging in front of the world.