Home Defence Defence Equipments What is Nirbhay missile? All you want to know about India’s indigenous 1,000-km nuclear-capable missile 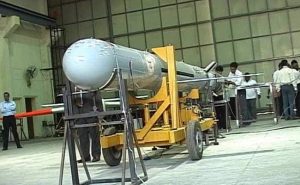 Another Made in India nuclear boost! Defence Research and Development Organisation (DRDO) has recently successfully test fired the Nirbhay missile from Integrated Test Range (ITR) on Abdul Kalam Island off Odisha’s Chandipur coast. This was the sixth test for the Nirbhay missile. The missile successfully met all the mission objectives. According to DRDO, the Nirbhay missile also showcased its sea-skimming capability to cruise at very low altitudes. The successful test of the nuclear-capable cruise missile adds much-needed strike and deterrance power to India’s defence preparedness.

The missile took off vertically and subsequently turned horizontal into the desired direction. Its booster got separated, wing was deployed, the engine started and cruised all the intended waypoints. The first test of the Nirbhay missile was conducted in 2013.

What is India’s Nirbhay missile?

Made in India nuclear power! Nirbhay is an indigenously designed and developed long range sub-sonic cruise missile. It is a nuclear-capable cruise missile and can carry warheads of up to 300 kg. With this test, India has also sent a stern message to Pakistan and China as the Nirbhay missile is capable of targetting any object within 1,000 km range. The Nirbhay missile is capable of loitering and cruising at 0.7 Mach at an altitude as low as 100 metres. It covered the designated target range in 42 minutes and 23 seconds, PTI reported quoting DRDO sources.

The state-of-the-art Nirbhay missile can eventually be deployed from multiple platforms – sea, land, aircraft and underwater. The latest test was conducted from the land. DRDO is also planning to develop ship, aircraft and submarine-launched version of this cruise missile. Su-30 MKI fighter planes will be equipped with such missiles once they are ready. DRDO wants to increase Nirbhay’s range to 1,500 km.