Vikas Manhas – Soldiers Story Teller Truly an Inspiration. A resident of J&K, A tall personality (Not the height though). Vikas can be best described as a “Family Member of our Martyrs”. This man without noise has travelled along the length and breadth of India not for vacation (or) adventure fun but to visit families of Martyrs. Vikas is doing this for the last 20 Years. 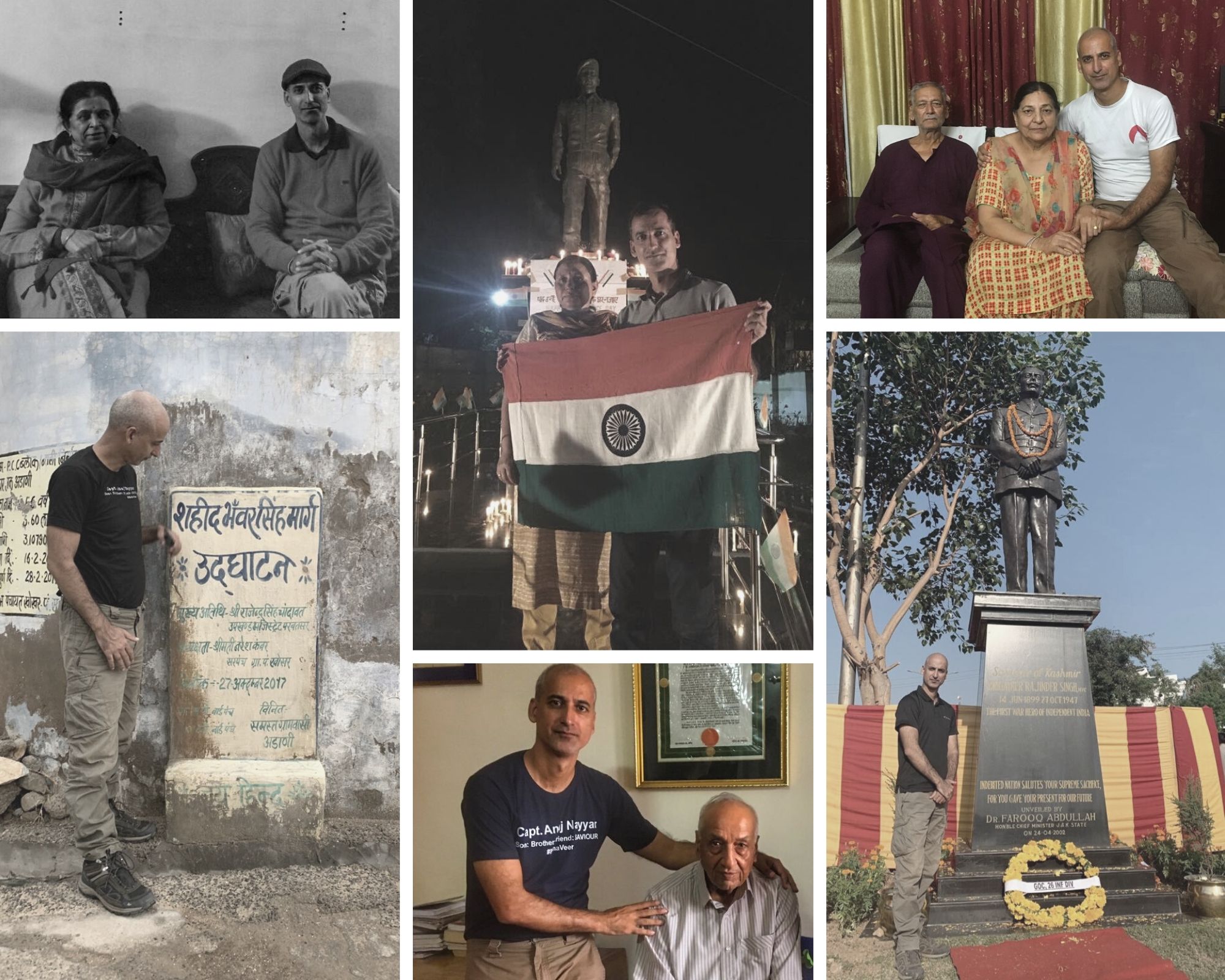 He is in touch with most of them. His noble gesture is admirable. Pulwama attack had shaken the entire country. While most of us spent time in solidarity. Vikas was identifying the 40+ Martyrs family. Inspite of multiple challenges he gathered informations about the 40+ Martyrs of Pulwama. He is currently coordinating the work to release a book on the 1st anniversary of Pulwama attack about these Martyrs. He says “This book is a dedication to family members of the Pulwama Martyrs”

Lets hear from Vikas Manhas himself…

What inspired you to pursue this Mission, Vikas Manhas?

“During my summer holidays, I went to my hometown of Bhadarwah, Jammu & Kashmir, to attend a family wedding. One night, before dinner, I decided to go out for a stroll, blissfully unaware of the dusk-to-dawn curfew in the valley. I only walked 30 steps when a searchlight blinded me, and a strong voice yelled ‘HALT!’ Fear gripped me, and my blood ran cold. I ran towards my home, locked it, and sat down with the rest of the family as though nothing had happened.”

Just when i thought that the nightmare had ended, a group of soldiers arrived at the door. “We have seen a terrorist run into this house,” they said.

“Shocked, my uncle denied it. With a lot of courage, I told them, it was me, and I was not a terrorist. They told me I was lucky because the soldiers knew they’d catch me. So they did not open fire. It was a close shave with death.”

When the wedding ceremony ended, I was the first person to enter the house. It was the same night i heard a volley of gunshots.

“As it turned dark, the sound of the bullets resounding within the valley became louder and clearer. I was scared and tried to block the sound. But it continued until 5 am. When we left home in the morning, we learnt that eight jawans had been attacked by terrorists. Seven of them had died in the ambush, and the only survivor spent the entire night fighting the militants to save the picket from being looted.”

As per the protocol then, the mortal remains of martyrs weren’t sent home. The soldiers would be cremated on the battlefield, and only their ashes would be wrapped in a handkerchief, which was sent back to their homes, with their bistarband (folded bedding).

“I was deeply disturbed to know that their families wouldn’t even get the chance to see them one last time. The soldiers carried out the rituals and took photographs. But my mind was blank. As I watched the bodies being consumed by the flames, I broke down and cried.”

Back in the day, information was a luxury. So even when the news of the martyrdom made it to the papers, none of their villages was mentioned. So all of  my efforts to get in touch with their families went to vain.

It wasn’t until the Kargil War in 1999 that the media started covering fallen soldiers in detail. With the dawn of technology, there were live broadcasts of their funerals. Their names, units, villages, details of their parents were readily available. I did not let go off the chance this time.

Thus began a journey that continues till date. 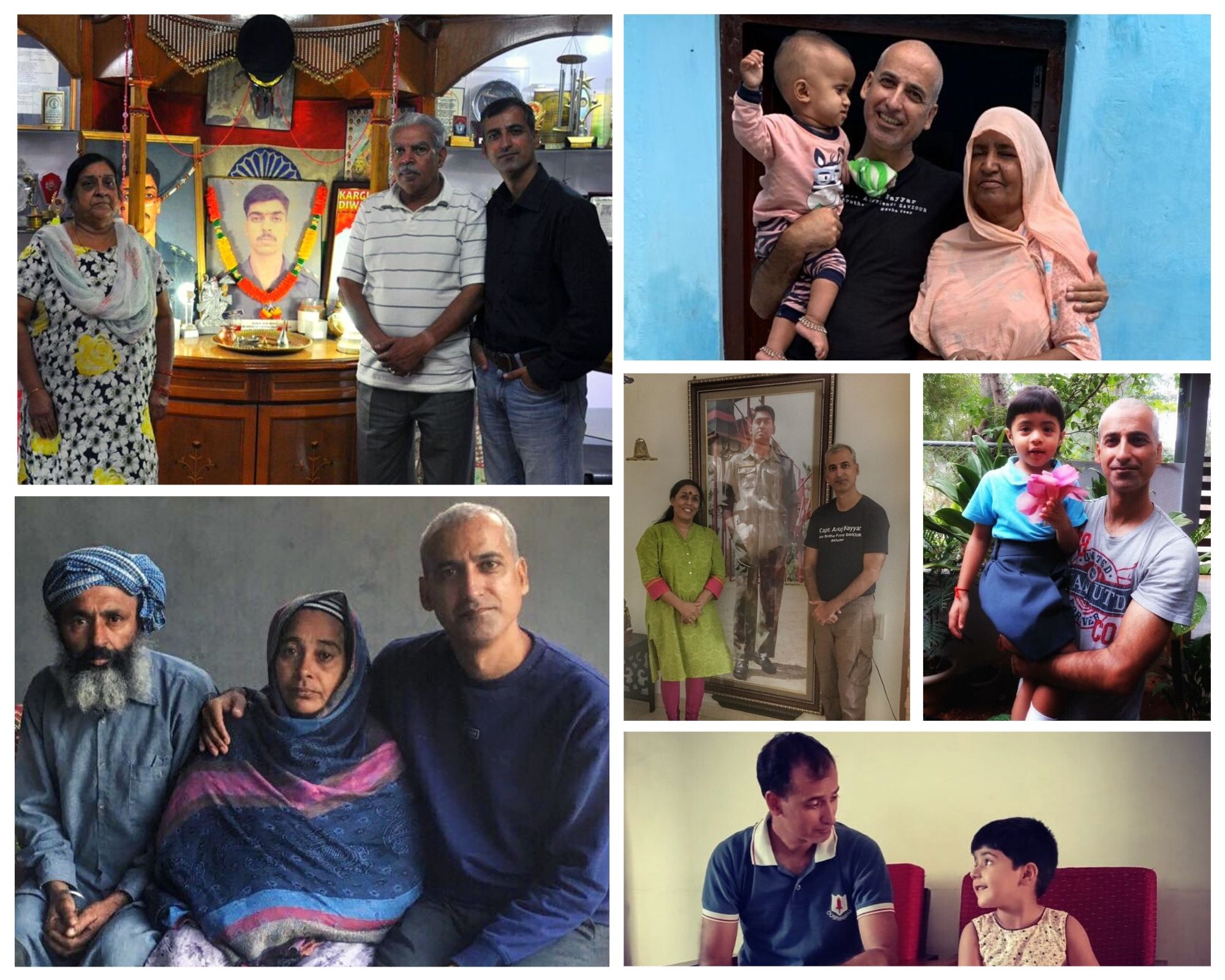 How many families have you visited / touched so far?

More than 300 Families till date.

How do you manage these trips?

I was working with Crosstream Consulting Pvt Ltd, a Bengaluru-based knowledge resource company, from 2007-11 it allowed me to travel to different parts of the country. During work trips, i would visit martyred families. But once i returned to Jammu in 2011, i started my own travel company in Talab Tillo, making my schedule flexible for more such trips.

Vikas When do you visit the Martyrs Family?

“I avoid visiting any grieving family in the initial weeks or months. This is a period when everyone visits them. While most offer emotional support, there are also a few who say insensitive things like, ‘Whom can you blame when you sent your son to the army? Was the money worth sacrificing your son?’ Others say things like, ‘But you must have received a lot of money when he died, right? How much did you get? Is your daughter-in-law going to take away the bigger share? Will she continue to stay with you? Will she get remarried?’ All kinds of ridiculous questions.”

“I prefer to visit them when regular visitors have returned to their daily routines. Because emotional support is required throughout, not just the initial months”

Its crazy to ask this question, But how do you start the conversation with the Family?

I donot begin by talking about the soldier / their family member. I speak about other martyred families with more painful stories. At most times, it helps ease their pain a little.

While women often let their guard down, due to their social conditioning, but men hold back their pain and inflict emotional damage on themselves. Sometimes, all they need is a stranger who patiently listens and allows them to vent.

Vikas Manhas Can you share the experience of your first visit?

The first home i visited was that of 19-year-old Grenadier Udayman Singh of 18 Grenadiers unit. The young soldier succumbed to gunshots on 5 July 1999 in the Kargil War. His home in Shamachak was just 20 km from my house.

I travelled on an impulse. But as I was on the way, several questions muddled me–what should I say? How would they react? I tried asking a few friends to tag along, but none of them agreed. So gathering my courage over months, I decided to go alone.”

When i reached Singh’s home and knocked on the door, a young girl opened it. When asked about the purpose of the visit, she replied, “I am here to meet Udayman Singh’s mother.”

I was let inside the home, into a room which had a mattress and a few photographs from different eras of Udayman Singh’s life.

“When his mother entered, she sat on the mattress with her head bowed down. For close to an hour, no words were exchanged. It was a comfortable silence. She was deeply grieving the death of her teenage son who laid down his life in the battle for Tiger hill. After an hour, she asked me if I wanted tea. She pointed to every picture in the room, narrating incidents from the slain soldier’s life. The last picture was of the 19-year-old sitting in his mother’s lap on their old cot. ‘This was the last picture he clicked with me before he left, never to return,’ she said.”

She insisted me to eat lunch with them, where i got acquainted with the rest of the family, including Singh’s sister who had greeted me at the door.

When the time came for me to leave, Singh’s mother asked me, “Are you on leave from posting? When are returning to serve?”

I told her i wasn’t in the army or even in Udayman’s unit. She was curious. I told her, “I came to pay my respects.”

Before i left, she asked me to visit again. And i did, several times. That was the beginning of a new journey.

Even as you and I talk within the safety of our homes, we aren’t scared that anybody will hunt us down. That is solely because a soldier is guarding us. A youngster who could have opted for a hefty package in a corporate office decided to join the armed forces. These are men who gave up their safety so we could have ours. They live in pathetic conditions on the border so we can go on comfortably in our lives. They don’t need our financial help because the government takes care of it. But we must extend emotional support to them and their families. This is so that no mother ever wonders if her son’s sacrifice was in vain. It adds meaning to the sacrifice their loved one made for the nation, for you and me.

Vikas Manhas is an inspiration. Anyone who wish to connect to Martyrs family can reach Vikas Manhas at