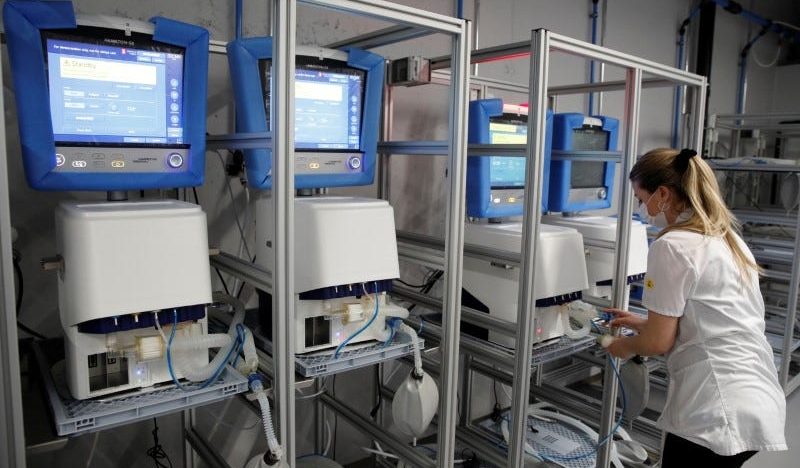 Cheering the Indian engineers for building a low-cost ventilator, the US hopes that this invention succeeds and can eventually be mass produced as the critical medical equipment can save many lives from the deadly coronavirus that has killed over 5,000 people in America and 40,000 others globally.

The United States, which as per latest projections is expecting between 100,000 and 200,000 deaths due to the coronavirus, requires thousands of ventilators in the next few weeks. It has roped in 11 private sector companies, including car manufacturers and plane makers to build ventilators.

“We are cheering on these Indian engineers as they race to build a low-cost ventilator — a potential game-changer for COVID19,” Acting Assistant Secretary of State for South and Central Asia Alice G Wells tweeted.

With support from the Massachusetts Institute of Technology engineers and production advice from a US-based company, “we hope this invention succeeds & can eventually be produced at scale,” Wells wrote.

According to the MIT, in the US alone, the COVID-19 pandemic may cause ventilator shortages of 300,000-700,000 units. An increase in conventional ventilator production is very likely to fall short and with significant associated costs.

Mass production of low-cost ventilators by a group of Indian engineers with the support from the MIT engineers and production advice from a US-based company, the US officials hope it would come as a big help to mankind which is racing against time in this fight against the deadly coronavirus.

Taranjit Singh Sandhu, India’s Ambassador to the US, described this as an important step in the fight against COVID-19.

“Important steps in combating the COVID19,” the ambassador said in a tweet. “Young engineers, with help from doctors and entrepreneurs in India and the US, are developing a low cost ventilator that could save thousands of lives. Here’s wishing them success!” Sandhu said.

While the average cost of current ventilators in the US is around USD 30,000, the MIT said that a rapidly assembled volunteer team of engineers, physicians, computer scientists, and others, centered at the MIT, is working to implement a safe, inexpensive alternative for emergency use, which could be built quickly around the world.

The team called MIT E-Vent (for emergency ventilator), was formed on March 12 in response to the rapid spread of the COVID-19 pandemic.

Its members were brought together by the exhortations of doctors, friends, and a sudden flood of mail referencing a project done a decade ago in the MIT class 2.75 (Medical Device Design).

Students and faculty working in consultation with the local physicians designed a simple ventilator device that could be built with about USD 100 worth of parts, although in the years since prices have gone up and the device would now cost USD 400 to USD 500 in materials, the MIT said.

The key to the simple, inexpensive ventilator alternative is a hand-operated plastic pouch called a bag-valve resuscitator or Ambu bag, which hospitals already have on hand in large quantities, it said.

The MIT said that these are designed to be operated by hand, by a medical professional or emergency technician, to provide breaths to a patient in situations like cardiac arrest.

As the deadly coronavirus crisis accelerates, a number of countries, including the US and India, are trying to procure ventilators needed for hospitals to deal with the demand caused by the virus outbreak.