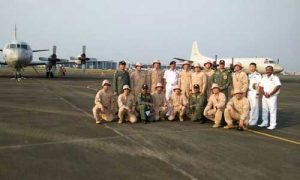 As part of the steady increase in Indo-Japanese military-to-military cooperation, two Japan Maritime Self-Defense Force (JMSDF) P-3C long-range maritime reconnaissance aircraft arrived at the naval airbase INS Hansa in Goa where they will participate in a joint exercise with the Indian Navy.

The two Japanese submarine hunters landed at the naval airbase at 4.30pm on Tuesday along with a 34-member detachment commanded by JMSDF Commander Shinji Akamatsu, the Indian Navy spokesperson said.

The Indian Navy’s Boeing P8-I long-range maritime reconnaissance aircraft, which is based at INS Hansa, and an Indian Navy submarine also participated in the exercise, which was held off Goa’s coast. The Japanese P-3C Orion is manufactured by Kawasaki Corporation under licence from American defence manufacturer Lockheed Martin. It has a maximum speed of 750km per hour with a range of 8,900km. The aircraft can carry anti-ship missiles, sonobuoys and torpedoes to detect and eliminate submarines.

Both Tokyo and New Delhi are concerned by China’s military modernisation and naval forays in the Indo-Asia-Pacific region. Chinese submarines have been carrying out regular patrols in the Indian Ocean and Pacific Ocean in the guise of anti-piracy operations. Naval officers say that the increase in Indo-Japanese defence relations and the continued efforts of the two navies is in line with the move to enhance safety and security in the Indo-Pacific region.

This is the third year in a row that the Japanese aircraft detachment conducted joint exercises with the Indian Navy off Goa’s coast.

The Lockheed Martin four-engine turboprop aircraft plays a crucial role in anti-piracy patrols at Gulf of Aden in the Arabian Sea, said a naval spokesperson. The ships of the two navies have been working in close coordination in anti-piracy operations in the region for the past few years and such exercises help the crew from both navies to gain “domain expertise”.