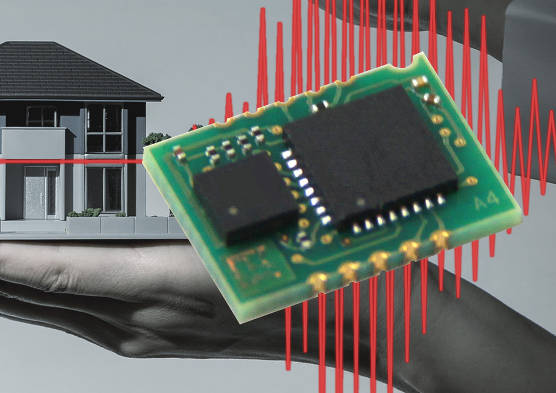 Rohm has announced a seismic detection module for applications requiring earthquake detection, such as automatic doors, unmanned transport vehicles and smart meters. Called BP3901, it is 11.8 x 8.6 x 2.5mm and integrates an earthquake detection algorithm, and a false detection prevention function that is “capable of accurately distinguishing between vibration due to earthquakes or other external factors”, said the firm, which distinguishes the module from mechanical earthquake detectors that can issue false positives as they only detect the presence or absence of vibration, without determining whether the vibration is due to an earthquake.

It also has a function that corrects its operation for up to ±15° of unintentional mounting tilt.

“Rohm will continue to develop algorithms optimised for different vibration detection and expand its sensor module lineup. We will also leverage wireless technologies, such as Wi-SUN, that is optimised for smart meter networks,” said Rohm.

Inside is a 3-axis accelerometer (from ROHM company Kionix) coonected to an MCU through an SPI bus. The algorithm focusses on ‘spectrum intensity’ values – a subjective measurement of the effects of an earthquake on humans, natural objects and man-made structures – correlated with measured seismic intensity data used in earthquake damage assessment “while it also optimises the digital signal processing of acceleration data and calculation parameters and sequence through analysis of measured excitation data”, according to Rohm.

As it is designed for always-on operation, standby current has been reduced – to 3.5uA – by optimising arithmetic processing.

“For example, installing this module in a fan heater exposed to an average of 10 seismic events a month [180 seconds each] enables operation for up to 5 years or more on two alkaline AA batteries in series,” said Rohm.

The last 16 seismic events – above a threshold – can be stored in order of movement magnitude in local non-volatile memory – enabling comparison of past earthquake data with equipment damage and deterioration.