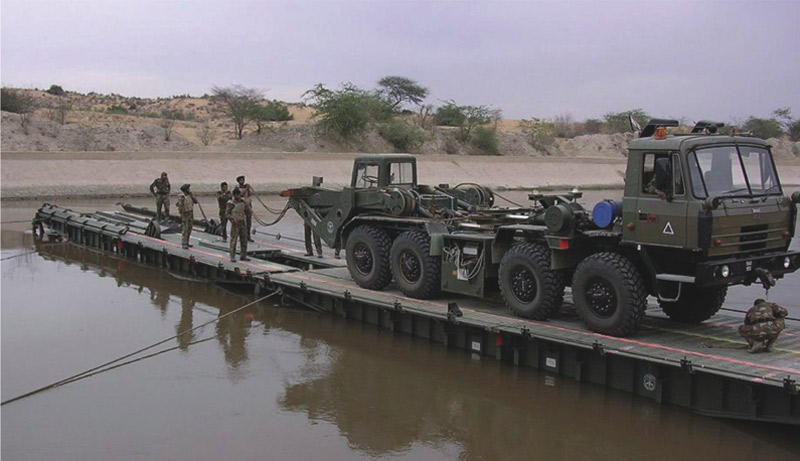 The Corps of Engineers with their motto of SARVATRA (Ubique in Latin, or ‘Everywhere’ in common parlance) are a league apart.

The officers of the Corps of Engineers are armed with a degree in engineering.

The ‘Sappers’ (as the Engineers are commonly known) are adept at a wide variety of important operational tasks ranging from minefield laying and clearing, bridging, road construction, handling of explosives etc.

The Corps of Engineers of the Indian Army is one of the oldest arms of the Indian Army. It was established in the year 1780 when the two regular pioneer companies of the Madras Sappers were raised.
Subsequently, the Group of Madras, Bengal and Bombay Sappers were formed and later merged on 18 November 1932 to form the Corps of Engineers in its present form. They were formed into field companies (a sub-unit organisation that exists to this day) grouped into regiments.
The Corps of Engineers of the Indian Army  consists of three major constituents namely Combat Engineers, MES (Military Engineering Service) and Border Roads. The Corps also provides officers to the Military Survey and Defence Research & Development Organisation (DRDO).
The military engineer is arguably the most under-rated individual on the battlefield. Yet military engineers have been leaders in innovation in the face of the enemy for centuries.
Any number of specialist corps originated within the engineers and at least one life-saving trade as well — firefighters. The artillery, the signals corps, among others, owe their existence to the intrepidity of the engineers — those who built and operated the “engines” or siege machines.
The South African Engineer Corps (SAEC) earned much kudos during World War Two — so much so that King George VI afterwards awarded another two flames to their “bursting grenade” corps insignia, raising the number to nine. It was — and remains — a singular honour.

What do Engineers do? Role of The Corps of Engineers

The fundamental task of the engineers can be summarised in a single word: mobility.
It is their mission to enhance (or at least maintain) own forces mobility while doing all they can to hinder enemy movement.
They do this by providing routes and bridging for personnel and vehicles to reach their objectives and by denying the enemy the same through demolitions, the wrecking of roads, culverts, defiles, bridges and the emplacement of mines.
They are also expected to develop existing routes and provide others to allow for supply of troops in combat positions.
This task flows into the host of household chores that make up the engineers’ secondary function. These include: