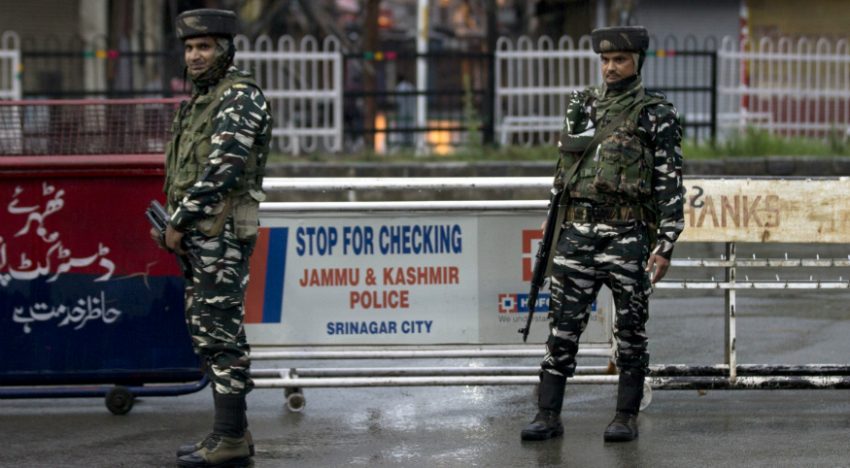 “The elements across the border are continuously trying to foment trouble in J&K, yet our forces are efficient enough to deal with any challenge,” said the state director general of police. Police have installed cameras at various vulnerable locations in Kishtwar town to keep a check on criminal elements.

Jammu and Kashmir police chief Dilbag Singh on Tuesday said elements across the border are consistently trying to foment trouble in the state but the security forces are efficient enough to tackle them. Singh made the statement in Kishtwar district of Jammu region, where terrorists struck four times over the past 10 months, killing four persons including two senior leaders of the RSS and BJP, besides snatching three service rifles from policemen.
“With continuous efforts and sacrifices of police and security forces, the graph of terror activities is decreasing with each passing day,” said Singh
“The elements across the border are continuously trying to foment trouble in Jammu and Kashmir, yet our forces are efficient enough to deal with any challenge with strong hands,” said the state director general of police.
The DGP interacted with the police and army personnel at Marwah and Kishtwar besides reviewing the security scenario of the district at a high-level meeting which was attended by, among others, Jammu’s Inspector General of Police Mukesh Singh, and Kishtwar’s Deputy Commissioner Angrez Singh and SSP Harmeet Singh, a police spokesman said.
The police chief interacted with police officers besides those of the Army and various central paramilitary forces and had a detailed deliberation on counter-insurgency operations in the district, which had been declared terror-free over a decade ago but the terrorist struck again in November last year, killing a BJP leader and his brother.
The terrorists again shot dead an RSS leader and his PSO before fleeing with the service rifle of the slain policeman.
In March, the suspected militants snatched the service rifle of a policeman before striking again on Friday at the house of a PDP leader and decamping with the service rifle of his personal security officer.
The perpetrators of the terror acts have been identified but are evading the arrest even as security forces have launched a massive operation to track them down, the police spokesperson said.
The DGP emphasised upon enhanced coordination and synergy among all security agencies for achieving “desired results”, he added.
“We have faced various challenges in form of terrorism and law and order. Jawans and officers faced these challenges bravely and foiled all attempts made by the elements bent to disrupt peace and law and order in Jammu and Kashmir,” the spokesperson said quoting Singh.
The DGP also complimented the role of various security forces and agencies assisting the local police in successful handling of the security and law and order duties, the spokesperson said.
The state police chief also directed officers and Jawans to continue to remain alert for efficient maintenance of peace after scrapping of the state’s special status by the Centre.
During the security review meeting at Kishtwar, the spokesman said, SSP Harmeet Singh apprised the police chief of the prevailing security situation in the district and steps being taken to tighten the security grid to counter any possible terror strike.
Earlier, the DGP inaugurated CCTV monitoring system at Police Control Room, Kishtwar.
While inaugurating the system, the DGP asked the monitoring team to maintain vigil on the activities of anti-national and anti-social elements.
Police have installed cameras at various vulnerable locations in Kishtwar town to keep a check on criminal elements, the spokesman said.