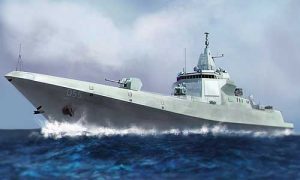 China’s massive naval parade at Qingdao on April 23 to mark the 70th anniversary of the creation of the People’s Liberation Army Navy turned out to be an anti-climax as smog played spoilsport. However, one ship among the 32 PLAN vessels on display triggered plenty of curiosity as its silhouette emerged through the smog—the first of China’s Type 055 class destroyers.

The vessel, designated the Nanchang, is considered to be the largest surface warship, excluding aircraft carriers and amphibious assault ships, built in Asia. The Type 055 class destroyer has a length of 180 metres and displaces over 11,000 tonnes. In comparison, the Indian Navy’s future destroyer, the INS Imphal, which was launched last week, has a displacement of 7,300 tonnes and length of 163 metres.

The INS Imphal is a ship of the Project 15B Visakhapatnam class and features modifications over the preceding Project 15A Kolkata class. Both the Project 15A and 15B class are derivatives of the Delhi class destroyers, designed in the late 1980s.

Moreover, the beam (width of the ship at its widest point) of the Nanchang is estimated to be over 20 metres, while the INS Imphal has a beam of around 17 metres. The difference in beam means the Nanchang has more space for equipment and also for future modifications.

While the Type 055 can carry far more missiles, the Indian Navy’s destroyers are considered on par with their Chinese counterparts in terms of electronics and weaponry. The Project 15A and Project 15B class ships use the Israeli MF STAR radar, which can detect targets over 450km away. The Type 055 class uses an ‘X band’ radar, mounted on a high mast, for detecting small, low-flying targets and a larger radar system fitted on its superstructure for long-range detection.

The Israeli-origin Barak-8 missile, while having a shorter range than the HHQ-9 system on the Type 055 destroyer, has an advanced radar seeker and a dual pulse rocket motor for higher probability of intercepting its target.

In 2018, the South China Morning Post had reported the PLAN had launched four Type 055 ships since 2017 and was building four more. A report on China’s naval modernisation by the US government’s Congressional Research Service in August 2018 quoted Chinese media reports that talked of a need for “at least 10” Type 055 class ships.

In 2018, the Pentagon’s Annual Report to Congress on China’s military noted that seven Type 052D class destroyers had been put into service and six more were being built. The Type-052D is roughly comparable in dimensions to the Project 15A and Project 15B class ships of the Indian Navy.

The same Pentagon report noted China had commissioned 24 Type 054A class frigates, which displace around 4,000 tonnes, and several more were being constructed. Interestingly, China is supplying Pakistan four Type 054A class ships. The Pentagon also noted that China had built more than 35 Type 056 class corvettes, small missile-armed warships that weigh less than 2,000 tonnes.

To understand the scale of Chinese naval construction, it would be be prudent to understand when the first of these aforementioned ships were launched: the first Type 056 entered service in 2013, the first Type 054A frigate entered service in 2008 and the first Type 055 was launched in 2017. According to the China Power Project of the Center for Strategic and International Studies, “Between 2014 and 2018, China launched more submarines, warships, amphibious vessels and auxiliaries than the number of ships currently serving in the individual navies of Germany, India, Spain, and the UK.”

Most major Indian Navy projects such as the Project 15A and 15B have faced delays due to issues in supply of components by vendors, integration of various systems and shipyard inefficiencies. The four Project 15B destroyers are three years behind schedule, caused in part by delay in delivery of equipment, including gas turbines, from Russia and Ukraine.

The Type 055 is likely to worry the Indian Navy not by the number of missiles it carries, but more for the fact that it is a symbol of China’s naval shipbuilding prowess.