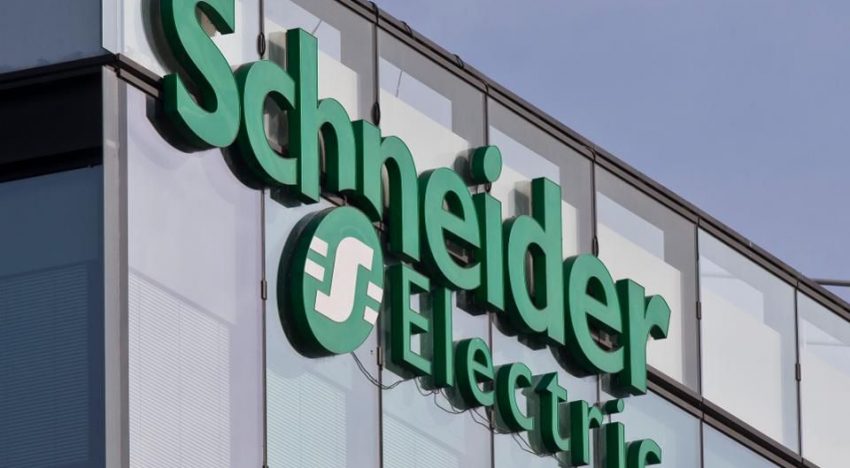 Schneider Electric (UPS Batteries) – Depending on who you ask, data centres are either the pigs that consume a disproportionate amount of the world’s energy production or the modern world’s models of energy efficiency. Data Center Knowledge research has increasingly pointed to the latter reality in recent years: power engineers have used data centres as laboratories for implementing efficiency techniques, as processor manufacturers continue to improve performance for ever-smaller power envelopes.

Nonetheless, this may be a short-term uptick in an otherwise bleak long-term (though not all that long) outlook. That is the message Schneider Electric experts have been conveying, and they amplified it on Thursday. The company framed the still-potentially-catastrophic climate problems facing our world as a whole in an invite-only event for select customers and members of the press, immediately following up with the introduction of a new line of more compact UPS power systems and battery cabinets for the data centre.

“We believe that there is no future for carbon neutrality unless we aggressively pursue a fully electric world,” declared Schneider Electric executive vice president for energy management, Phillipe Delorme, “because electricity is the greenest energy; a fully digital world, to enable greater efficiency; and combining the two to achieve carbon neutrality by 2050.” And the wonderful news is that we believe there is a way forward. This is not science fiction; this is practise.” 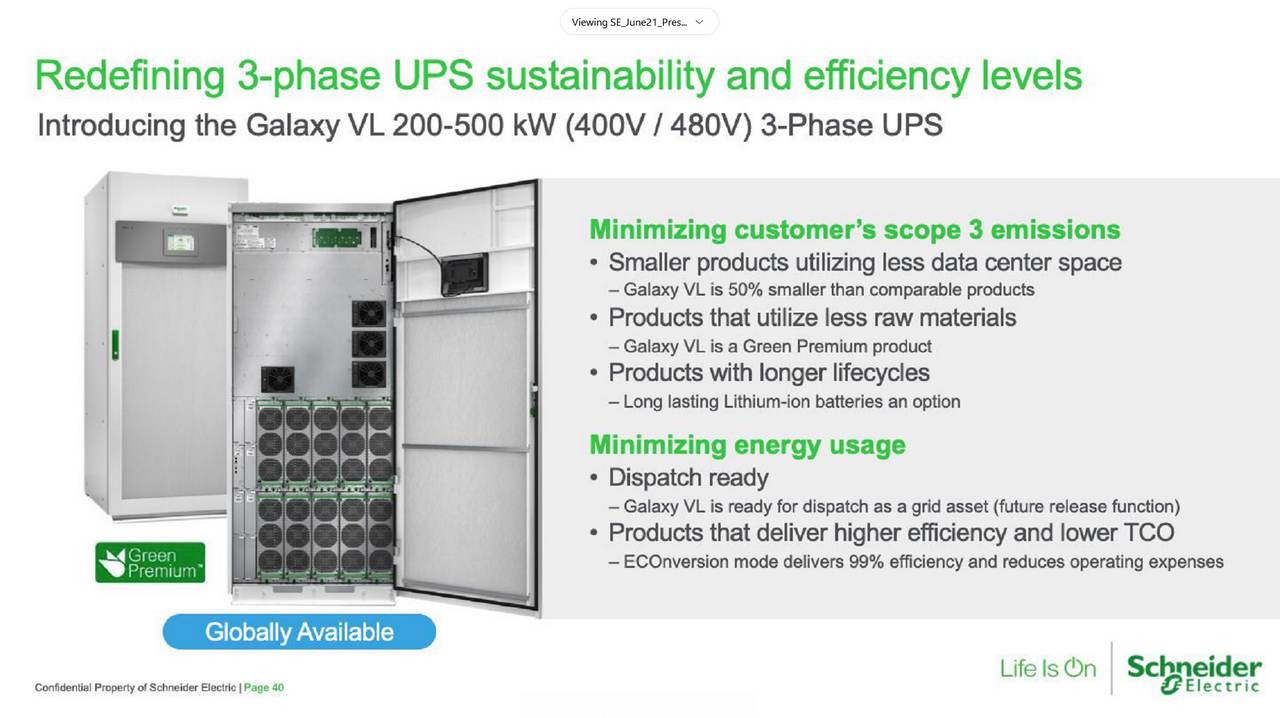 Delorme’s path would steer operators through to the company’s Galaxy VL line of three-phase UPS cabinets. Announced last April, SE made them available Thursday, in new, much smaller cabinets, delivering between 200 and 500 kW of stored power, incrementable in 50 kW units.

“When coupled with lithium-ion batteries, this UPS can be used in a grid-interactive mode, which means it can be used for peak shaving or grid support features such as frequency regulation — which not only contributes to local sustainability, but also to the adoption of moratoriums,” Simonelli explained. 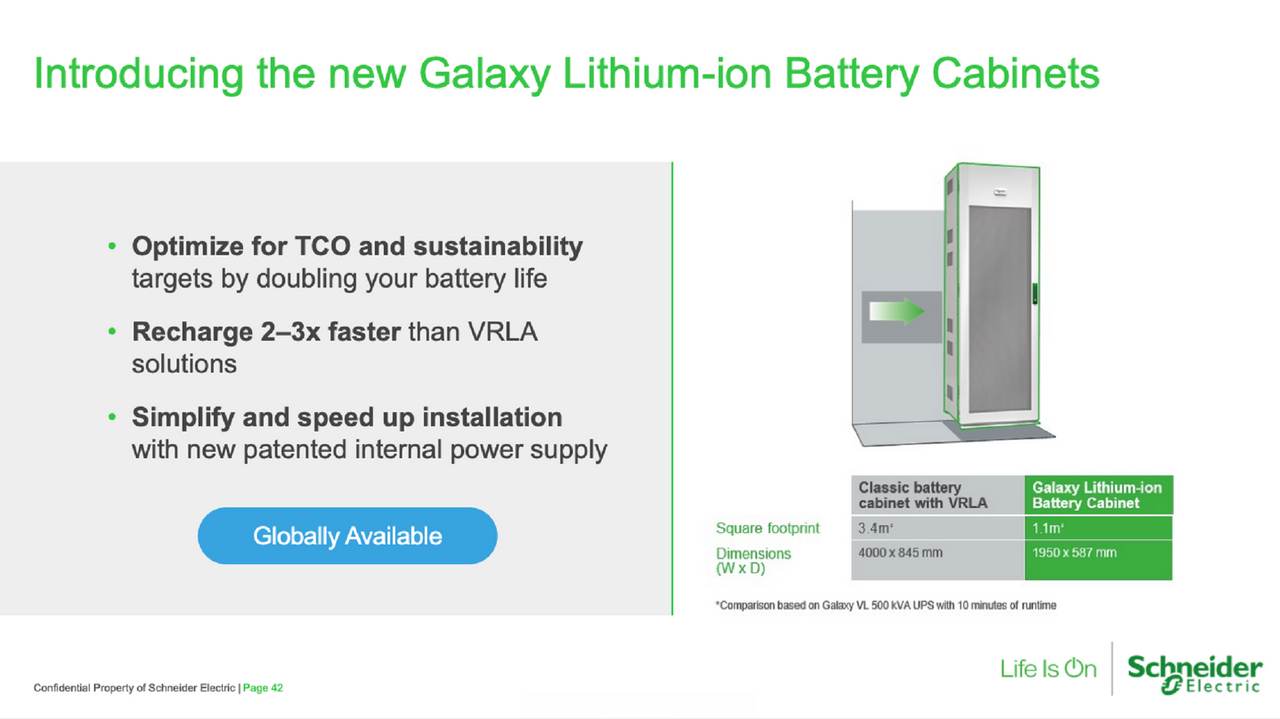 SE is leading the charge to transition facilities away from valve-regulated lead acid (VRLA) batteries, which remain the most prevalent type in active use. When lithium-ion (Li-ion) batteries were first introduced in data center-ready form factors, there was widespread doubt about their safety. In November 2019, Chris Brown of the Uptime Institute advised operators to confine new Li-ion components to purpose-built rooms, safely separated from other components, until more data about their behaviour in failure mode situations could be gathered. Thermal runaway remained a concern, and no track record for installation procedures or costs existed.

Simonelli stated that these new cabinets address these concerns by consuming just over a square metre of floor space and having only two internal connections: power and system control. “These battery cabinets can be daisy-chained together in a matter of minutes and are ready to use. We have significantly lower installation costs than even its lead-acid predecessors.”

In that vein, SE’s APC division unveiled a 3 kW UPS appliance with a 1U form factor on Thursday. Smart-UPS Ultra will be available to North American customers in September, with global availability following the pandemic’s (hopefully) end and shipping activity returns to normal the following year.

Simonelli described Smart-UPS Ultra as “the world’s lightest, smallest, single-phase, 3 kW UPS.” It’s better suited to edge environments, such as micro data centres, where space is scarce and the only option is to bracket one of these things to a wall, he added. As photographs demonstrated, this is possible.

However, are these the tools necessary to avert global catastrophe, as SE’s Delorme hinted? Recent and semi-recent studies have revealed an unexpectedly high carbon cost associated with the manufacture of Li-ion batteries — their cells, the chemicals used to fuel those cells, as well as the plastics, aluminium, and other materials used to house and contain the batteries. According to a study published in August 2016 by engineers at the Karlsruhe Institute of Technology, the total energy consumed in the manufacture of a Li-ion rechargeable battery averages 110 gram-equivalents of CO2 (“greenhouse gas”) emissions (g CO2 e) for every 1 watt-hour (Wh) of storage capacity.

According to estimates made last February by Data Center Knowledge with the assistance of world-renowned power expert Jonathan Koomey, manufacturing the battery components for a 3 kW APS Smart-UPS Ultra unit generates the same amount of carbon emissions as driving an average mid-engine, gasoline-powered automobile for approximately 38 hours.

We asked SE’s senior vice president for its North American information technology division, Jay Owen, what his company can do to assist customers in compensating for, and eventually overcoming, the “carbon traps” left by Li-ion batteries — the fact that it takes carbon emissions to offset carbon emissions.

“There is no doubt that Schneider is a purpose-driven organisation,” Owen responded, “and a critical component of that purpose is enabling sustainability across all aspects of our business.”

He explained that lithium-ion batteries have the advantages of being more durable and recyclable, as a manufacturer can create new lithium-ion components from old ones. Additionally, it is frequently more compact and lightweight. “In my opinion, when those benefits are considered, it makes perfect sense to migrate away from VRLA or other, older battery technologies and toward Lithium-ion. Is it the apex/benchmark? Unlikely. However, it is the optimal solution for the application we have today.”

A growing chorus of Li-ion sceptics, particularly on social media, point out that users do not always recharge Li-ion batteries with renewable energy. That may be true for general consumers, but not for SE’s consulting clients, as Owen pointed out. Schneider Electric energy consultants frequently assist data centre operators with renewable energy procurement.

“We are a significant energy purchaser on behalf of clients,” he explained, “and when clients are interested in purchasing energy from renewable sources in particular, we can assist them in doing so.

“I cannot stand up and claim that data centres are completely neutral in everything we do,” Jay Owen continued. “However, making our products more efficient enables our customers to accomplish those objectives.”