Minimum number of featured posts is 4.
Home News Defence News No need to import trainer aircraft, HTT 40 to be ready by December 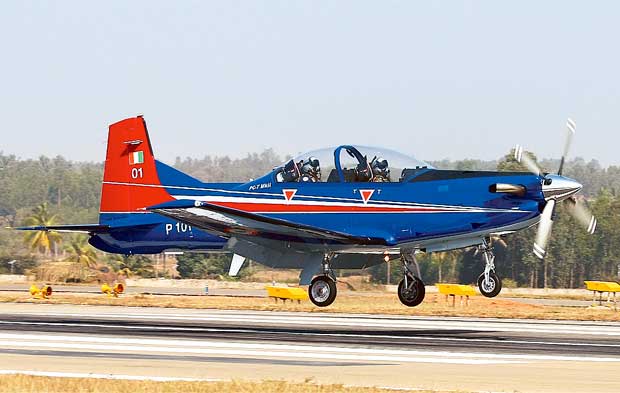 India does not need to import any more basic trainer aircraft for the armed forces as the indigenous HTT 40 will be ready by the end of this year, state-run Hindustan Aeronautics Ltd (HAL), which has invested Rs 550 crore in the development project, has said.

With the defence ministry banning Swiss company Pilatus, which supplied the current set of PC 7 Mk II trainers to the Air Force, HAL said the import requirement of 36 aircraft can also be added to the indigenous order and that the first unit can be delivered within a year.

“We have completed most of the tests and the aircraft has been performing very well,” HAL chairmanR Madhavan told ET. “We should be able to complete the spin tests (the last stage) by December and will have the aircraft certified as well. If the Air Force places the order, the first one can be delivered within a year.”

The defence ministry has already committed to buying 70 of the HTT 40 aircraft and HAL has formally represented that the additional order for 36, which was initially reserved for Pilatus, also be added to its kitty. “This should add to our order as it would make it much easier for everyone – the per aircraft cost will come down as the total number will cross 100. The HTT 40 is unique as it is specifically designed to meet all requirements put up by the Air Force,” the HAL chairman said.

As reported by ET, Swiss firm Pilatus has been banned this month after the defence ministry found it guilty of violating an integrity pact after it was revealed that it paid over 1 million Swiss francs to a company owned by arms dealer Sanjay Bhandari.

The Central Bureau of Investigation (CBI) has registered a case naming the company and all dealings have been banned for at least a year. Before the Swiss company was banned, the Air Force had been in negotiations to acquire 36 more of the PC 7 Mk II aircraft to its fleet of basic trainers, given an acute shortage that has impacted training of its pilots.

On reports that the IAF was looking at an import option to meet the requirement of 36 basic trainers, the HAL chairman said it would be much quicker to place an order for the HTT 40, which is also being looked at by other nations. “The Air Force has to take a call but we have nearly completed the project and can deliver within one year of the order being placed. In fact, other nations have also shown interest in the aircraft and we have received many enquiries, including for a light ground attack version,” Madhavan said, adding that the HTT 40 can also be used for the intermediate training stage.

HAL will be able to produce the aircraft on its existing lines but needs to order raw material and stores against an order to start the production. The two prototype aircraft that are currently being tested can be offered for trials to the Air Force by the year-end.

As reported by ET, the Air Force is heading into what could be a training crisis with all its plans to acquire new trainer aircraft hitting a roadblock and two indigenous programmes to develop basic and intermediate training planes missing critical internal deadlines.

The Air Force has painted a grim picture for its trainer aircraft fleet by pointing out that efforts to develop a basic trainer under the HTT 40 programme is running five years behind schedule, with HAL unlikely to even be certified for flight by 2021even if there are ‘no uncertainties in development testing’. HAL, however, counters this by saying that the initial operational clearance (IOC) certification will be available by the end of this year, following which production versions of the aircraft can be rolled out.