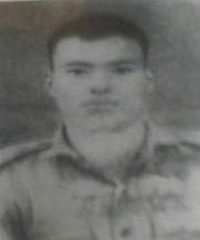 Gorkha Rifles Regiment, an infantry regiment famed for its valiant troops and a long history of several battle victories, he was trained to be a medic.

His battalion was dispatched to Siachen Glacier in Sep 1987 as part of Operation Meghdoot. In June 1987, the Indian Army took over Quaid Post at Bilafond La and renamed it Bana Post after Nb Sub Bana Singh of 8 JAK LI. Since then, opposing soldiers have repeatedly attacked to retake lost ground. On September 23, 1987, a concerted attack was conducted against the Indian Post at Bilafond La. The Indian forces skillfully repelled it. Enemy soldiers again attacked the position with heavy artillery on September 24th/25th 1987. During that time, Naik Prem Bahadur Gurung and his division manned the position.

The Section Commander was killed in the bombardment, so Naik Gurung took over. His sector was out of ammo as the conflict raged. Undeterred, he ran twice to his platoon’s HQ to resupply his sector. Despite six deaths, his Section repelled a succession of hostile strikes. On September 24, 1987, around 0325 hours, the opposing soldiers attacked again. When the enemy forces were within 50 yards of the post, Naik Gurung rushed out of his trench, hurling grenades and firing his guns. His bravery caused the hostile soldiers to retreat in fear. Naik Gurung tossed his gun, unbuckled his khukri, and assaulted the fleeing troops, killing three. While fighting, he was shot in the chest and badly injured. He died of his wounds and was martyred. Naik Gurung was a brave and dedicated soldier who died in the line of duty. “Maha Vir Chakra” was awarded to Naik Prem Bahadur Gurung for his outstanding courage, indomitable spirit, and great sacrifice.

Naik  Prem Bahadur Gurung of 4 Gorkha Rifles was inducted into the Siachen Glacier where his Company occupied the defences at the Bilafondla complex. On the night of 23rd/24th September 1987, troops of the adversary launched determined attacks on his post, but were repulsed. Again on the night of 24th/25th Sep 1987, the adversary’s troops launched a massive attack on the post with heavy artillery shelling. During the shelling, the Section Commander became a casualty and Naik Prem Bahadur Gurung took over as the Section Commaner. As the battle was raging, his section was running out of ammunition. Undeterred, he ran to to his platoon headquarter twice under intense firing to replenish his section with ammunition. His Section ultimately managed to beat back a series of adversary’s attacks, despite six casualties.

On 24th September, 1987, at about 0325 hours, the adversary’s troops launched yet another attack. When adversary’s troops were just 50 yards from the post, he got out his trench and charged at them, throwing grenades and firing with his rifles. In the face of this gallant charge, adversary’s troops took to their heels. Having exhausted his ammunition, Naik Gurung threw his rifles, unbuckled his khukri and ran after them hacking three out of the four fleeing soldiers. But, during the hand to hand fight, he was shot in the chest and later succumbed to his injuries.

Naik  Prem Bahadur Gurung thus displayed conspicuous bravery in the face of adversary’s troops and made the supreme sacrifice.