Major Vivek Gupta MVC ( 2 January 1970 – 13 June 1999) was an officer in the Indian Army. He was posthumously conferred the Maha Vir Chakra, India’s second highest war-time military honour, for his actions during the 1999 Kargil War (Operation Vijay). He belonged to the second battalion of the Rajputana Rifles, also known as 2 Raj Rif. He was also awarded the Chief of Army Staff (COAS) commendation card during his service. 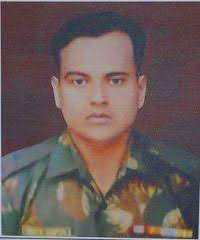 Maj Vivek Gupta played an important role in the capture of the Tololing peak during the Kargil conflict in 1999. When the Indian army lacked sufficient intelligence regarding the scale of the invasion, the 2nd Rajputana Rifles stepped in to fill the information void. Lieutenant Colonel Gupta and his Rajputana Rifles’ 2nd Battalion were entrusted with recapturing position 4590, located in the Drass area, and returning it to Indian control.

2 RAJPUTANA RIFLESMajor Vivek Gupta was in command of the leading Charlie Company, when 2nd Rajputana Rifles launched a battalion attack on Tololing Top, in Drass sector on 13 June 1999. Inspite of heavy artillery and automatic fire, the company under the inspiring leadership of Major Vivek Gupta was able to close in with the enemy. As soon as the Company emerged in the open, they came under multi-directional intense fire. Three personnel of the leading section of the Company were hit and the attack was temporarily stalled. Knowing fully well that staying any longer in the open under the murderous enemy fire would lead to more losses, Major Vivek Gupta reacted immediately and fired a rocket launcher at the enemy position. Before the shocked enemy could recover, Major Vivek Gupta charged on to the enemy position. While so charging, he was hit by two bullets, despite which, he kept moving towards the position. On reaching the position, he engaged the enemy in fierce hand-to-hand combat and managed to kill three enemy soldiers despite his own injuries.

Taking inspiration form the gallant deed of their officer, the rest of the company charged onto the enemy position and captured it. However, in the ensuing combat, Major Vivek Gupta received another direct from enemy bullets and finally succumbed to his injuries. Major Vivek Gupta displayed conspicuous gallantry and inspiring leadership in the face of the enemy, which, ultimately led to the capture of Tololing Top