The Madras Regiment is the oldest infantry regiment of the Indian Army, originating in the 1750s. The regiment took part in numerous campaigns with both the British Indian Army and the post-independence Indian Army.

History
The town of Madras was founded in 1639 and the first Fort Saint George in 1644. In August 1758 they were formed into regular companies of 100 men each with a due proportion of Indian officers, havildars, naiks, etc. and in December of that year the first two battalions were formed with a European subaltern to each company and a captain to command the whole. (These officers were mostly seconded from the King’s service with a step in rank. They were of a better class, better educated and above all had far more military experience than the company’s officers).

The Madras Regiment was initially formed as the Madras European Regiment in the 1660s by the East India Company as the second company established in India. However, it was formed as a battalion in 1748 under the command of Major Stringer Lawrence. The battalion was involved in all the battles against the French forces in India. Lawrence structured the regiment to include two battalions, one European and one Sepoy (Indian). Both battalions were similar in structure and included seven companies each, with each company including three officers in command and seventy privates. Also part of the companies were four sergeants and corporals and three drummers.

The oldest battalion of the Regiment (and thus the Indian Army) was the 9th Battalion, formerly known as the Nair Brigade (Nayar Pattalam, “Nair Army”). This militia was raised in 1704 at Padmanabhapuram as body guards for the Maharajah of Travancore, and were active in the Battle of Colachel in defeating the Dutch forces. The army was made up of soldiers from Nair warrior clans, however after the 1940s, non-Nairs were permitted to join. The “Nayar Army” became incorporated into the Indian Army in April 1951.

In 1748 Major Stringer Lawrence, a veteran of action in Spain, Flanders and the Highlands, was hired by the East India Company to take charge of the defence of Cuddalore. He laid the foundations of what was to become the Indian Army. Training the levies to become a militia, the Madras Levies were formed into “companies” and trained to become a disciplined and fine fighting force. In 1758 Lawrence raised the Madras Regiment, forming the several Companies of Madras Levies into two battalions. 2 Madras was raised in 1776 as the 15th Carnatic Infantry at Thanjavur (and underwent many name changes thereafter). The regiment has been through many campaigns with both the British Indian Army and the Indian Army. Many well-known British officers have commanded this regiment, among them Robert Clive. This regiment fought in the Carnatic wars, which were fought in South India. The elephant crest symbolises its gallantry in the Battle of Assaye under Arthur Wellesley, later Duke of Wellington.

There after the British annexed the Indian sub-continent, largely with the help of the Madras Regiment sepoys. The coming of the British rule and merging the Presidency armies into a British Indian Army led the erstwhile regiments to be reorganised. After conquest of India, the main perceived threat to British was from Russia. So recruitment was re-oriented towards north Indians of Punjab and Nepal. This resulted in the British reducing the strength of the Madras Regiment since the southern borders were relatively peaceful. After many years, this regiment was re-raised with fresh recruits and a draft of troops from the Madras Sappers during World War II. The newly reborn Madras Regiment performed very creditably during the Burma Campaign. 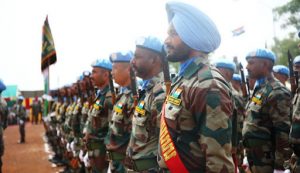 After independence, the infantry battalions of the Travancore “Nair Pattalam”, Cochin and Mysore State forces were amalgamated into the Madras Regiment. Post-independence saw the consolidation of the Regiment and re-affirmation of the versatility and valour of the South Indian troops when the battalions of the Regiment fought fierce battles during the 1947–48 Jammu & Kashmir Operations, the 1962 Sino-Indian Conflict and the Indo-Pak Wars of 1965 and 1971. The deployment of as many as seven battalions of the Regiment in Sri Lanka during Operation Pawan in 1987–89 was a testimony to the faith the Indian Army reposed in the loyalty, dedication and valour of the troops of the Madras Regiment. Two battalions (3 and 25 Madras) of the Regiment have been awarded unit citations by the COAS in recognition of their splendid service in combating insurgency in Jammu & Kashmir and Punjab. Further two battalions served the nation, in the world’s highest battlefield in the sub-zero temperatures of Siachen Glacier. The Madras Regiment has taken part in various humanitarian aid operations in India. It has also taken part in various UN Peacekeeping missions.

Currently the regiment has a strength of 21 battalions as follows:

Regimental tribute
Let those who come after, see to it that these names be not forgotten,
For they who at the call of duty, left all that was dear to them,
Endured hardships, faced dangers, and finally passed out of sight of men,
In the path of duty and self-sacrifice, Giving their lives that we might live in freedom.