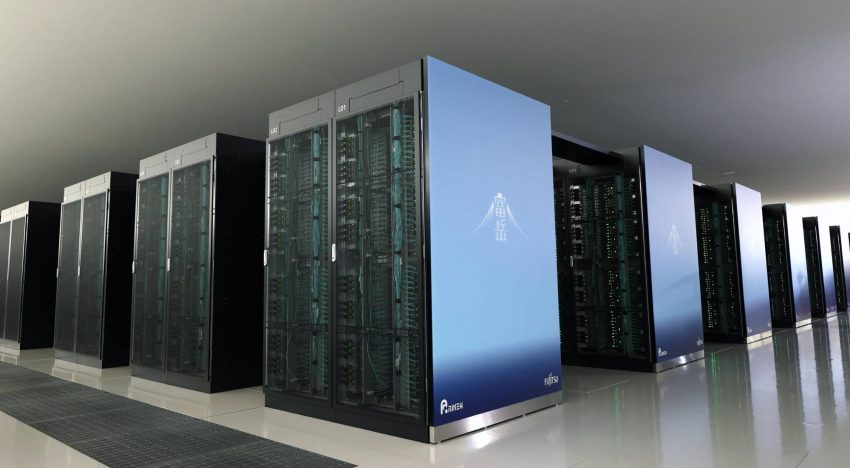 Japan’s Arm – powered Fugaku -The most recent ranking of the top 500 fastest supercomputer shows little change from six months ago.

Japan’s Fugaku supercomputer, powered by Arm, continues to dominate the Top500 list, with only one new entry into the top 10 – NERSC’s 64.6 petaflops Perlmutter supercomputer.

Japan’s Arm – powered Fugaku achieved 442 petaflops with 7,630,848 cores on the HPL benchmark. That is the same as it was in November 2020, but it is higher than the 415.53 petaflops it achieved at this time last year when it first topped the list.

The Japan’s Fugaku supercomputer is powered by Fujitsu’s custom Arm A64FX processor and does not include a graphics processing unit (GPU).

Then there’s the 148.8 petaflops Summit supercomputer at Oak Ridge National Laboratory, which is nearly three years old. It is powered by 27,000 Nvidia Tesla V100 GPUs and 9,000 IBM Power9 processors.

Then there’s the Sierra supercomputer, which is similar in design but is operated by Lawrence Livermore National Laboratory and is capable of 94.6 petaflops.

China is fourth, with the Sunway TaihuLight achieving a peak performance of 93 petaflops using Sunway SW26010 processors. It is five years old now.

It is followed by Perlmutter, the first HPE Cray Shasta system, which features a heterogeneous architecture comprised of AMD Epyc CPUs and Nvidia A100 GPUs.

Selene, Nvidia’s in-house corporate supercomputer, is ranked sixth. As expected, it is composed of a large number of Nvidia DGX A100 SuperPODs and is capable of 63.4 petaflops.

China re-enters the top ten at number seven with the Tianhe-2A, which is capable of 61.4 petaflops.

The “JUWELS Booster Module,” an Atos BullSequana supercomputer equipped with Epyc CPUs and A100 GPUs, is Europe’s most powerful supercomputer. It is located in Germany and has a processing power of 44.1 petaflops.

The list is completed by the Texas Advanced Computing Center’s Frontera supercomputer at the University of Texas. When not shut down for storms, it has a peak performance of 23.5 petaflops with 448,448 Intel Xeon cores.

While the fastest supercomputers remained relatively unchanged, the rest of the list contains additional information.

AMD fared well, with Top500 noting a “significant increase” in its use. This is mirrored by AMD’s overall advancements in the server and high-performance computing (HPC) space, where it has surpassed Intel in market share.

Cloud computing has also grown in popularity, with Pioneer-EUS no. 24 and Pioneer-WUS2 no. 27 both being Microsoft Azure instances (the company also claims it built a top 5 system for OpenAI). As the name implies, the Amazon EC2 Instance Cluster at No. 41 makes use of Amazon EC2.

China continued to dominate the list with the most systems (186), but this was a significant drop from the previous ranking (212).

Meanwhile, the US jumped from 113 to 123. Cumulatively, those systems were also more powerful, achieving 856.8 petaflops, compared to China’s 445.3 petaflops.

The Top500 noted that “there has been little conclusive evidence as to why [China’s lacklustre performance] occurred,” although it could be related to mounting sanctions against Chinese high-performance computing firms. Both of these factors make it more difficult for businesses and research labs to procure supercomputing equipment and make it less likely for them to participate in a voluntary ranking system that could put them in the crosshairs of regulators.

The country had previously hoped to launch an exascale supercomputer (1,000 petaflops) by 2020, but that goal has been repeatedly delayed.

China has challenged the National University of Defense Technology (NUDT), the National Research Center for Parallel Computer Engineering and Technology (NRCPC), and server manufacturer Sugon (which has been sanctioned) to develop an exascale supercomputer.

We now have a better understanding of one of the groups’ approach to replacing the Sunway TaihuLight system at the National Supercomputing Center in Wuxi, but definitive deadlines remain absent.

The United States’ own exascale plans have also encountered a number of setbacks. Initially, its first exascale supercomputer was planned solely as a result of delays with its Aurora supercomputer. The Intel-powered machine was originally scheduled to launch in 2018 as a 180 petaflops system, but the government delayed the launch and upgraded it to an exascale system after Intel cancelled the chip intended to power it. However, Intel is still struggling to develop the necessary new chips, further delaying Aurora.

As of now, the US is scheduled to unveil the 1.5 exaflops Frontier supercomputer this year, which will be powered by AMD CPUs and GPUs. It will be based on Cray’s Shasta architecture and Slingshot interconnect technology, both of which were discovered in Perlmutter.