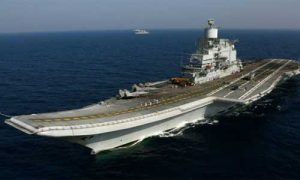 France and India are indeed scheduled to hold their largest-ever naval exercise, from May 1, regrouping their respective aircraft carriers, along with destroyers, submarines, auxiliary ships and fighters. “It will be a top-level naval exercise, with intensive dual carrier task group operations and anti-submarine warfare manoeuvres. India and France are also working to implement their action-oriented joint strategic vision for cooperation in the Indian Ocean Region (IOR), which was finalised in March 2018” said a source.

For the Varuna exercise, apart from its nuclear-powered aircraft carrier, France will be dispatching some of its destroyers, including the FNS Forbin, the FNS Provence and the FNS Latouche Treville, a nuclear attack submarines, the FNS Amethyste, and the tanker FNS Marne. As for India, the Navy will dispatch diesel-electric submarine INS Shankul, guided-missile destroyer INS Chennai, stealth frigate INS Tarkash and tanker INS Deepak, along with P-8I long-range maritime patrol aircraft and Dornier-228 planes.

Continuously increasing its interoperability with reliable foreign navies, India just concluded the AUSINDEX with Australia, and will soon take part in the trilateral Malabar exercises with the U.S.A. and Japan.