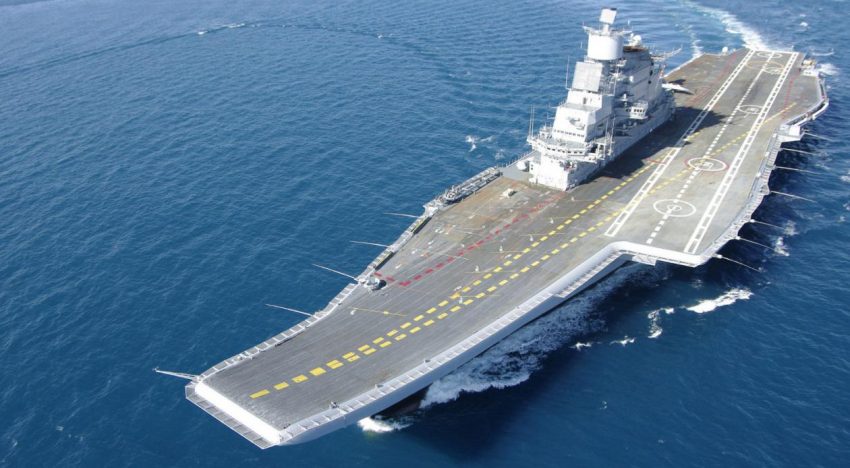 The work on Indigenous Aircraft Carrier (IAC)-1 is currently moving at a brisk pace and it is likely to go for basin trials in February-March next year, a senior Indian Navy official said Monday.

Vice Admiral A K Saxena, controller of Warship Production and Acquisition, said the gas turbines are expected to start in the third quarter of this year.

“IAC-1 is presently moving at a very, very brisk pace and the plans are to go in for basin trials sometime in February-March next year. That will be followed with a series of Contract of Sea trials and ultimately culminate in to delivery of the ship sometime in early 2021. Towards this, a hectic activity is going on on board the ship,” Vice Admiral Saxena said in response to a question during a seminar on ‘Nation Building Through Shipbuilding‘ organised by FICCI here.

Basin trial is the testing of ship machineries and equipment in floating conditions before the sea trials. The IAC-1 is named INS Vikrant.

Replying to a question on IAC-2, he said the requirement, by and large, has been expected based on the developments taking place in India’s neighbourhood.

“The number of aircraft carriers being built by China… At this moment, it is an issue related to the availability of finances versus priority of requirements. Aircraft carrier by itself has no meaning. It has to be built around aircraft that will ultimately be operating from this new ship. So this is still under deliberations,” he said.

“We do need the aircraft carrier for projecting our sea-borne air power requirements,” he asserted.

The order books of Indian shipyards for building warships has been supported by the Indian Navy and the Coast Guard. There is a need to raise the competitiveness in manufacturing indigenous ship-borne equipment. To generate the required volumes for long-term sustenance of the industry.

This sustenance in long term is possible only if India becomes globally competitive and diversified. To build ships and ship-borne equipment for merchant navy, he said.

He said shipbuilding has been identified as a key strategic sector under the ‘Make in India’ initiative. As growth in the sector leads to spinoffs for industries such as steel, electrical and engineering equipment.

It also has huge potential for employment generation, he added.