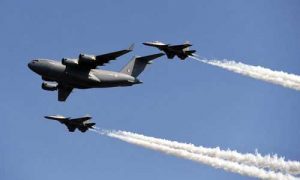 In this unfolding geopolitical threatening environment being generated by the solidifying China-Pakistan Axis no scope exists for India to afford to base its Indian Air Force structuring and Fighter Planes inventory only on the Pakistan Threat. The Indian Air Force must more importantly focus on dedicated squadrons and complement fighter planes strengths for dealing with both the China Threat and the Pakistan Threat.

The Indian Air Force has suffered immeasurably in the period 2004-14 in terms of political neglect and allocation of financial resources to move towards the above inescapable imperative. Congress Party Prime Ministers have ‘Shied Away’ from use of Indian Air Force strike power with the exception of PM Lal Bahadur Shastri. India’s first PM Nehru did not use the Indian Air Force strike power to stem the tide of Chinese aggression in the 1962 War to avoid a humiliating military debacle. China at that time had not developed effective aerial warfare infrastructure in China Occupied Tibet.

In2019, Indian politics hit a new low when Opposition Congress President in election year politics stooped to slander on Indian Air Force Rafale Deal with France and in an unprecedented downslide in Indian politics questioned not only the Indian Air Force Balakot Strikes but also the assertions of Air Force Chief Dhanoa that air strikes results could have been more spectacular and lethal had there been Rafale Fighter Planes available, which should have been acquired in time-frame 2004-14. 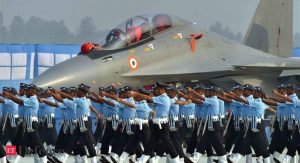 In 2019, India has to face the strategically worrying spectacle of Indian Air Force number of Fighter Squadrons on a downslide compounded further with growing obsolescence of its combat aircraft in comparison to the growing fast track accretions in the Chinese Air Force and the Pakistan Air Force.

India cannot expect its Indian Air Force to juggle around with limited number of squadrons and an overaged Fighter Planes Fleet by extended upgradations and improvisations. For long India’s past political leadership accepted this sorry state of the Indian Air Force as the ‘New Normal’ in utter disregard of the evolving military menace of the China-Pakistan Axis.

When the incumbent Prime Minister took the first steps in 2015 to augment Indian Air Force strike power instead of bipartisan support petty politicking overtook the imperatives of India’s national security for questionable gains.

The IAF needs a minimum of 45-55 squadrons of Fighter Planes to meet the dual threat posed to Indian sovereignty by the China-Pakistan Axis. This strength is an inescapable imperative for India to meet the twin challenges of securing India’s air-space and also having the operational capabilities to launch offensive air-strikes against China and Pakistan should aggressive operations be undertaken against India’s sovereignty.

In 2019, even the minimum squadron strength of 42 squadrons aimed as the very minimum stands miserably reduced to about 31 squadrons as per media reports. Dismally, the projections of IAF Fighter Squadron strengths go down to 25 squadrons in the coming decade. This is based on assessments of the phasing out of over-aged Fighter Planes and lack of fast-tracked acquisition plans, the urgency of which has to sink-in India’s Ministry of Defence bureaucracy tasked to highlight such critical deficiencies to the political leadership.

India to get over this looming crisis of the Indian Air Force in terms of its declining strike power needs emergency augmentation of its combat Fighter Planes fleet by speedy “Off the Shelf” purchases. Whatever is the cost? When survival or the national image of credible power of the Indian Republic is at stake there exists no listening to or politicisation of Indian Air Force needs by an irresponsible political Opposition.

Political apathy and political indifference has been the striking characteristic of India’s political leadership when it comes to IAF critical acquisitions to enhance its strike capabilities. This needs to be highlighted in more detail in relation to the unwarranted political heat generated by the Congress President Rahul Gandhi on the fast-track acquisition of 36 Rafale Fighter Planes from France to augment some operational punch for the IAF.

This despite the criticality of IAF’s air-strike power limiting India’s strike options in the wake of Mumbai 26/11 Pak-based terrorist attacks denting India’s image as regional power without fangs to deter its enemies. This inadequacy was even highlighted in the Pakistan media.

The 21st Century global conflict as that of the preceding Century amply highlight that a nation’s Air Force plays a decisive role in modern warfare obviating or limiting the use of ground forces. This strategic reality has not hit India’s political leadership until after 2014 and is compounded by the Ministry of Deface bureaucracy neither having the expertise nor the inclination to grasp the urgency of Indian Ai Force ‘Strike Power’. This strike power is equally important for deterrence of India’s enemies and also for hitting them hard should they attempt to indulge in military adventure against India.

Even for nuclear deterrence the role of the Indian Air Force cannot be minimised on the plea that the role gets supplanted by India’s nuclear tipped missiles. The latter have their own application but nuclear-capable strike power of the Indian Air Force has its own place. And this is where the Rafale Fighter Planes acquisitions by India Air Force become crucial besides other roles.

In last seven decades while India made spectacular strides in developing missiles including ICBMs and ASAT missiles, past Governments did not pay requisite focus on India achieving fast-track production capabilities of indigenous Fighter Planes. The reason again has been political apathy and sustained neglect. Political corruption or wrong foreign policy choices may have been an underlying rationale for not developing an indigenous Fighter Planes production capability.

Concluding, one needs to emphasise and re-emphasise that India cannot achieve its aspirational goals of being the undisputed regional power in the Indo Pacific and emerge as a credible Major Global Power unless it has virile, hard-hitting Indian Air Force whose very existential credibility provides India with tremendous political and military coercive power. India needs to hit the ground running in urgent augmentation of Indian Air Force strike power.