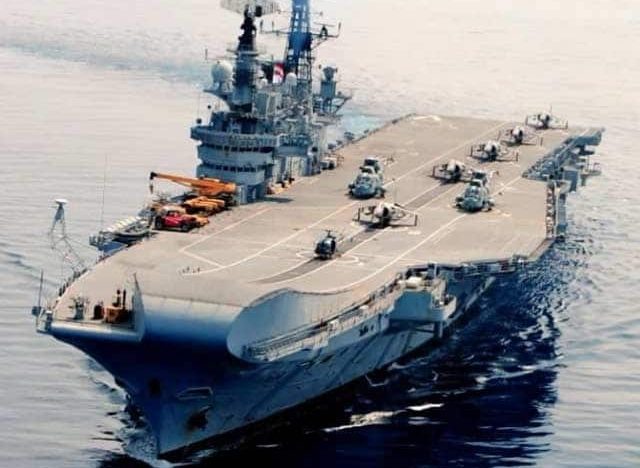 Defence establishment sources on Wednesday said “close tabs” are being kept on the unfolding Pakistani exercise. The Indian armed forces also being kept operationally ready “to prevent any misadventure”. The Navy is also using its Poseidon-8I patrol aircraft for long-range maritime reconnaissance over the exercise area.

India has “forward deployed” some warships, submarines, maritime patrol aircraft and fighter jets to keep track of a major naval exercise by Pakistan in the north Arabian Sea, which will include missile and rocket firings as well as combat manoeuvres over the next few days.
Top defence establishment sources on Wednesday said “close tabs” are being kept on the unfolding Pakistani exercise, with the Indian armed forces also being kept operationally ready “to prevent any misadventure” by the neighbouring country during it.
“There is a heightened threat perception about strikes, whether by state or non-state actors, after India revoked Jammu and Kashmir’s special status. Even if the Pakistani exercise is a regular one, like the joint naval-air one called `Ribat’ conducted every year, intentions can change very quickly,” said a source.
Pakistan, on its part, has issued a maritime alert for commercial shipping in the north Arabian Sea that it will be conducting “live” missile, rocket and gun firings between September 25 and 29. The entire exercise will be tracked, both in terms of “operational capabilities and any deviations from the routine”, by “several assets” of the Indian Navy and IAF, said sources.
The Navy, apart from warships and submarines, is also using its Poseidon-8I patrol aircraft for long-range maritime reconnaissance over the exercise area. “There are at least seven to eight Pakistani warships there,” said a source.
The Indian armed forces have been maintaining high operational readiness ever since the IAF conducted the pre-dawn air strikes against the major Jaish-e-Mohammed training facility at Balakot in Pakistan on February 26. The Balakot facility, incidentally, was revived for terror training earlier this month.
“Though a conventional military conflict does not seem likely, we cannot take any chances. Moreover, after J&K’s special status was revoked on August 5, there have been several intelligence inputs that a big terror strike could be in the offing,” said an official.
Soon after the Balakot air strikes, Indian warships, submarines and aircraft had swiftly transited from the then ongoing “Tropex-2019” exercise, which included aircraft carrier INS Vikramaditya and nuclear submarines INS Arihant and INS Chakra, to operational deployment in the north Arabian Sea to “box the Pak Navy close to the Makran coast”, said officials.
The Navy had then stated that its “overwhelming superiority” in all three dimensions – surface, under the sea and in the air – and “stepped-up operational posture” had not allowed the Pak Navy to venture out into the open seas.
Last month, the Indian defence establishment had also kept a close watch on the “Shaheen VIII” exercise between the Chinese and Pakistani air forces near Holton in northwest China last month. “Chinese J-10 and Pakistani JF-17 fighters, among other aircraft, took part in the exercise. We have to keep tabs on our adversaries,” said an officer.