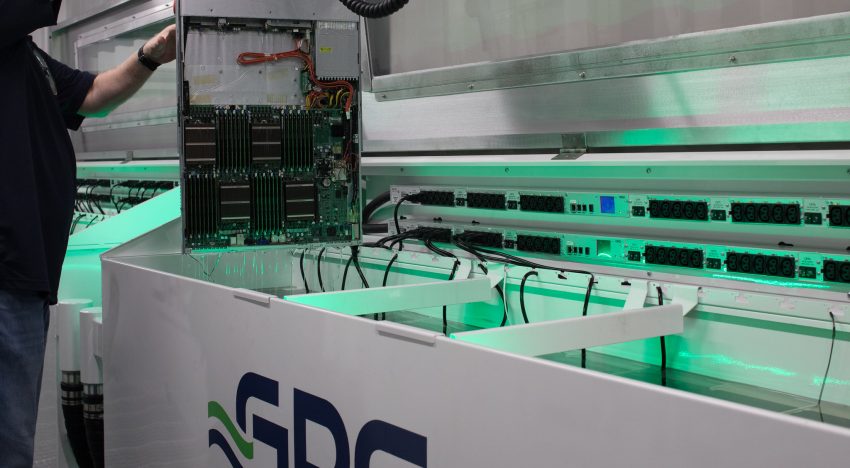 The Series 10 immersion cooling system now features flatter surfaces and a more compact footprint to conserve floor space. One immersion cooling tank can now cool up to 200kW in a horizontally mounted 42U rack. The Texas Advanced Computing Center is the first customer (TACC).

The new version incorporates the containment area, eliminating the need for external containment decks. The new design allows for end-to-end placement of units without the need for a walkway, allowing data center operators to pack the units in more densely. The system appears more tidy, with cosmetic panels concealing cables and plumbing.

GRC’s ElectroSafe mineral coolant is used to fill the tank, and heat is removed via secondary water cooling. If warm (32C) water is used in the secondary circuit, the tank can accommodate up to 200kW of IT power, which is distributed via up to four power distribution units (PDUs) mounted at the rack’s rear. Simply open the lid to access the networking and power connections.

If chilled water at 13C is used in the secondary circuit, the capacity can be increased to 368kW per tank at a cost of efficiency. GRC has stated that it intends to higher power capacity even further in the future by using a brazed plate heat exchanger that is 50% larger.

The system continuously monitors for leaks and provides real-time data on water and coolant temperatures, as well as pressure, coolant pump power consumption, and coolant pump speed, all of which can be accessed via Schneider Electric’s DCIM.

According to GRC, the system has a 10% lower total cost of ownership and an 18% lower capex than the previous model.