Hamid enlisted in the army in December 1954 and was assigned to the Grenadiers regiment’s 4th Battalion. During the Sino-Indian War, his regiment fought the People’s Liberation Army in Namka Chu. During the 1965 Indo-Pakistani War, the 4 Grenadiers unit was entrusted with a crucial position on the Khem Karan–Bhikhiwind line, just before the village of Chima. Hamid damaged seven Pakistani tanks and was killed during an encounter with eight during the Battle of Asal Uttar on 9–10 September 1965.

Early life
Hamid was born to Sakina Begum and Mohammad Usman Idrishi (a tailor by Profession) in a family of 4 more brothers & 2 sisters in the village of Dhamupur in Ghazipur district, United Provinces, British India on 1 July 1933.

Military career
He joined the Grenadiers regiment of the Indian Army on 27 December 1954. Hamid was later posted to the regiment’s 4th Battalion (formerly the 109th Infantry), where he served for the rest of his career. He served with the battalion in Agra, Amritsar, Jammu and Kashmir, Delhi, NEFA and Ramgarh.

During the Sino-Indian War of 1962, Hamid’s battalion was part of the 7th Infantry Brigade commanded by Brigadier John Dalvi and participated in the battle of Namka Chu against the People’s Liberation Army. Surrounded and cut off, the battalion broke out on foot into Bhutan and on to Misamari. Second Lieutenant G. V. P. Rao was posthumously awarded the Maha Vir Chakra for his actions during the war; it was the highest gallantry award received by the battalion since Indian independence, until Hamid’s commendation.

On September 10, 1965, a Pakistan regiment launched an attack at a strategic location near Cheema village in the Khem Karan sector. CQMH Abdul Hamid, who was then commander of a RCL gun detachment took and advantageous position and knocked out the leading enemy tank and then, swiftly changing his position, sent another tank up in flames. Hamid destroyed six Pakistani tanks and was killed during an engagement with a seventh on September 10, 1965 at 32 years of age, and was awarded the Param Vir Chakra, India’s highest gallantry award.

Param Vir Chakra
For his actions at the Battle of Asal Uttar, Hamid was awarded the Param Vir Chakra on 10 September 1965. The official citation read: 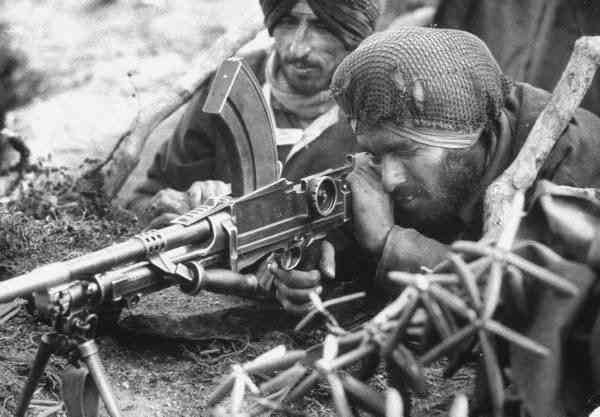 At 0800 hours on 10 September 1965 Pakistan forces launched an attack with a regiment of Patton tanks on a vital area ahead of village Cheema on the Bhikkiwind road in the Khem Karan Sector. Intense artillery shelling preceded the attack. The enemy tanks penetrated the forward position by 0900 hours. Realising the grave situation, Company Quartermaster Havildar Abdul Hamid who was commander of a RCL gun detachment moved out to a flanking position with his gun mounted on a jeep, under intense enemy shelling and tank fire. Taking an advantageous position, he knocked out the leading enemy tank and then swiftly changing his position, he sent another tank up in flames. By this time the enemy tanks in the area spotted him and brought his jeep under concentrated machine-gun and high explosive fire. Undeterred, Company Quartermaster Havildar Abdul Hamid kept on firing on yet another enemy tank with his recoilless gun. While doing so, he was mortally wounded by an enemy high explosive shell. Havildar Abdul Hamid’s brave action inspired his comrades to put up a gallant fight and to beat back the heavy tank assault by the enemy. His complete disregard for his personal safety during the operation and his sustained acts of bravery in the face of constant enemy fire were a shining example not only to his unit but also to the whole division and were in the highest traditions of the Indian Army.