Colonel Sonam Wangchuk, MVC is an Indian Army veteran, who served with the Assam Regiment and the Ladakh Scouts. He was awarded the Maha Vir Chakra, India’s second highest award for gallantry in the face of the enemy, during his successful operation in the Kargil War. 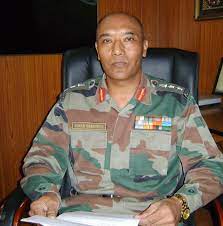 Col. Wangchuk comes from Khakshal, a district near Leh in the Indian union territory of Ladakh. Supstan Chhewang’s sister and Kushok Bakula Rinpochhey’s niece.  At the age of five, he relocated to Solan, Himachal Pradesh. He finished fourth grade at St. Luke’s. Sacred Heart High School in Dharamshala in 1973. His father was the 14th Dalai Lama’s security officer, thus he spent a lot of time with him. His father moved to Delhi in 1975. Wangchuk attended The Modern School Barakhamba Road and Sri Venkateswara College, University of Delhi, and graduated in History. His father wanted him to be a civil servant, but Wangchuk joined the Indian Army because of a relative Colonel Wangdus.

Wangchuk attended the Officers Training Academy in Chennai and was commissioned into the 4th battalion of the Assam Regiment as a Second Lieutenant. He was posted to Ukrul in northeast India as a company commander. He then served in Sri Lanka as a part of the Indian Peace Keeping Force. He was later posted to the Indus Wing of the Ladakh Scouts. In 1999, at the outbreak of the Kargil War, then Major Wangchuk led an operation against Pakistani troops in the Chorbat La pass, on 31 May which was the first successful operation of the war, for which he was awarded the Maha Vir Chakra. On 21 August 2017, President Ram Nath Kovind released a documentary named “Lion of Ladakh” about the troops under Wangchuk who repelled enemy forces from Chorbat La.

On 30 May 1999, Major Sonam Wangchuk was leading a column of The Indus Wing, Ladakh Scouts as a part of ongoing operations in Op VIJAY in the Batalik Sector. The column was tasked to occupy Ridge Line on the Line of Control in a glaciated area at a height of about 5,500 metres. This was essential so as to pre-empt its occupation by the enemy and any subsequent infiltration.
While moving towards the Line of Control, the enemy ambushed the column by firing from a vantage position. In the process, one NCOof The Ladakh Scouts was killed. Major Sonam Wangchuk held his column together and in a daring counter ambush, led a raid on the enemy position from a flank, killing two enemy soldiers. The officer also recovered one heavy machine gun and one Universal machine gun, ammunition, controlled stores and three dead bodies of the enemy personnel.
Thereafter, the officer took stock of all forces along the Chorbatla axis in the Batalik Sector and cleared the axis up to the Line of Control of all enemy intrusions at great risk to his life.
Major Sonam Wangchuk displayed exceptional bravery and gallantry of the highest order in the presence of enemy fire and in extreme climatic conditions in the glaciated area