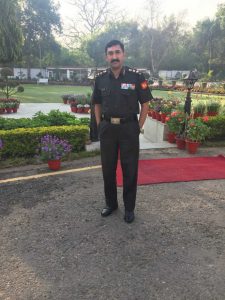 A second-generation soldier, Balwan Singh was inspired to join the Indian Army by his father Shobha Chand, a decorated veteran of the 2nd Jat Battalion. After completing his senior secondary education from Sainik School, Karnal, Balwan Singh joined University College, Rohtak and following graduation entered the Officers Training Academy (OTA) Chennai. In March 1999, he received a short-service commission in the 18 Grenadiers, with the service number SS-37691

With just four months of service when the Kargil War broke out, Balwan Singh was tasked to lead his Ghatak platoon in an attempt to capture Tiger Hill during the eponymous battle. Before leading his troops into action, Singh vowed “Tiger Hill pe Tiranga fahrake ayenge, chahe kuchh bhi ho jaye.” (“We will hoist the Tricolour atop Tiger Hill, come what may.”)

On 03 July 1999 Lieutenant Balwan Singh with his Ghatak platoon was tasked to assault the ‘Tiger Hill Top’ from the North Eastern direction as part of a multi pronged attack. The route to the objective situated at a height of 16,500 feet was snowbound and interspersed with crevasses and sheer falls. The officer, with just three months service, set about his task with single-minded determination. The team led and exhorted by him, moved for over twelve hours along a very difficult and precarious route and under intense artillery shelling to reach the designated spur.

This move took the enemy by complete surprise as his team used cliff assault mountaineering equipment to reach the top with stealth. On seeing the Ghataks, the enemy panicked and in a desperate firefight attempted to repulse the Ghataks. In the ensuing firefight, Lieutenant Balwan Singh was himself seriously injured. However his resolve to finish the enemy remained unshaken. He refused to be evacuated and unmindful of his injury, moved swiftly to encircle the enemy and engaged them in close combat and single handedly killed four enemy soldiers. The remaining enemy personnel opted to flee rather than face the fury of the fierce officer. His inspirational leadership, conspicuous courage and bravery were instrumental in the capture of Tiger Hill, which was operationally one of the most important objectives in the Drass sector.