Colonel Bikkumalla Santosh Babu MVC (13 February 1983 – 15 June 2020) was an Indian Army officer and the commanding officer of 16 Bihar Regiment. He was killed in action during the 2020 China–India skirmishes 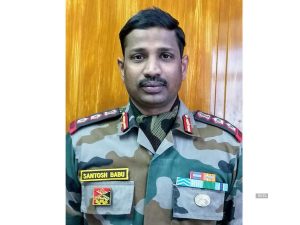 On 27 November 2000,  Babu joined the National Defence Academy 105 Course and subsequently went to the Indian Military Academy in 2004. During his time at the NDA, he belonged to the “November” squadron. He was commissioned a lieutenant in 16 Bihar on 10 December 2004

The Galwan Valley Chinese soldiers were disengaged after high-level discussions during the 2020 clashes with the PLA in eastern Ladakh. On June 14, PLA forces built tents and an observation station on the LAC, violating a 6 June agreement.  On the night of June 15, Babu himself led a delegation to the Chinese, despite the fact that typically a company commander of the level of major would have been called to handle the issue.
Colonel Babu tried to ask the Chinese soldiers why they had built the observation station, but they refused to answer. A PLA soldier allegedly shoved the colonel, insulting him in Chinese, triggering an Indian-PLA fistfight lasting 30 minutes. [18] Both sides were hurt, but the Indians defeated the Chinese and destroyed their observation station. Despite his injuries, Babu calmed his men, sent the wounded back to base, and asked for reinforcements. The PLA forces then assaulted the outnumbered Indian troops with sticks, stones, and clubs encased in barbed wire. In response, 16 Bihar soldiers attacked the PLA soldiers with bayonets and iron rods and clubs.  Replenishments of the PLA began hurling huge stones towards the Around 9 p.m., one struck Babu in the head, forcing him to fall into the Galwan River.

IC-64405M COLONEL BIKKUMALLA SANTOSH BABU
On 15 June 2020 as Commanding Officer Colonel Bikkumalla Santosh Babu was deployed in Galwan Valley (Eastern Ladakh) in Operation Snow Leopard. He was tasked to establish an Observation Post in the face of the enemy. Undaunted by the violent and aggressive action by an overwhelming strength of enemy soldiers, he in true spirit of service before self continued to resist the enemy’s attempt to push back the Indian troops. Despite being grievously injured, he led from the front, in hand to hand combat until his last breath.