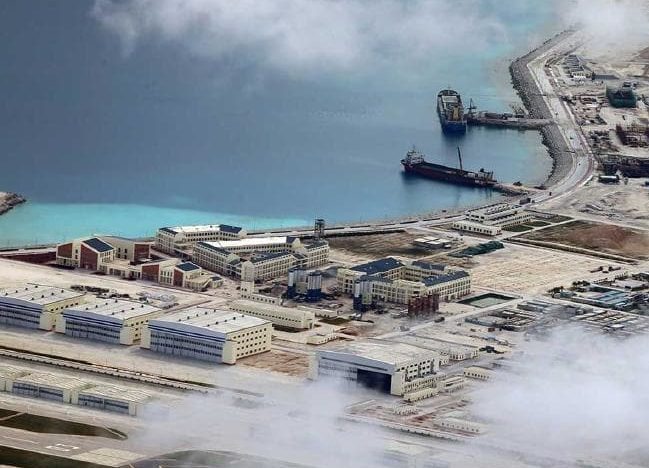 China is holding military exercises in the South China Sea (SCS) ahead of third anniversary of the PCA ruling in favour of Philippines reinforcing its claims in the world’s most critical trade route via sea.

The location of the drills as between the contested Paracel and Spratly island groups. China’s navy, coast guard and maritime militia are a constant presence in the region and it staged a massive fleet review in the area last year featuring its sole operating aircraft carrier, the Liaoning.

Beijing has placed advanced weapons systems on several disputed features in the region, including on seven islands it built by piling sand and concrete on top of coral atolls. Some of those are now equipped with harbors, airstrips, radar and missile stations, expanding China’s ability to monitor and potentially control activity by other military forces in the region.

Philippines v. China (PCA case number 2013–19), also known as the South China Sea Arbitration, was an arbitration case brought by Manila against Beijing under Annex VII to the United Nations Convention on the Law of the Sea (UNCLOS) concerning certain issues in SCS including the legality of China’s Nine-dash line. On 12 July 2016, the tribunal ruled in favor of the Philippines. The tribunal also ruled that China has “no historical rights” based on the “nine-dash line” map.

However, there are allegations that the Duterte administration of the Philippines is continuing to cede ground in the South China Sea through an “informal” and “undocumented” agreement between President Duterte and Chairman Xi Jinping.

Last month a Chinese vessel rammed a Filipino boat anchored near Reed Bank in the South China Sea, sinking it and abandoning the fishermen on board, the AFP reported, citing a statement by Philippine Defense Secretary Delfin Lorenzana.

The Reed Bank belongs to Vietnam’s Spratly (Truong Sa) Archipelago. Vietnam has full legal basis and historical evidence to assert its sovereignty over the Hoang Sa (Paracel) and Truong Sa (Spratly) Islands in the waterway, as well as legal rights over its waters in accordance with the 1982 United Nations Convention on the Law of the Sea (UNCLOS).

The Filipino fishermen were later rescued by a Vietnamese fishing boat. “We denounce the actions of the Chinese fishing vessel for immediately leaving the incident scene and abandoning the 22 Filipino crewmen to the mercy of the elements,” Lorenzana said.

He also thanked the captain and crew of Vietnamese boat for saving the lives of the 22 Filipino crew while calling for a formal investigation on the incident and for diplomatic steps be taken to prevent a repeat of such events.

The South China Sea, which is home to more than 200 specks of land, serves as a gateway to global sea routes where approximately $3.4 trillion of trade passes annually. India whose bulk of trade passes through SCS maintains that territorial disputes should be resolved through peaceful means as was done by India and Bangladesh using the mechanisms provided by the UNCLOS, and parties should abide by the Declaration of the Conduct of Parties in the South China Sea. India supports a peaceful settlement of the dispute. Peaceful means should be used according to the principles of international law, including the UNCLOS.

To rebalance China U.S. congressmen have introduced legislation that would sanction companies or individuals that support China’s claims in the contested South and East China seas. The bill, introduced by representatives Mike Gallagher of Wisconsin and Jimmy Panetta of California, maintains that unimpeded access to those waterways is crucial to global security and international commerce.

Earlier head of the US Navy warned China that its coastguard and maritime militia would be treated in the same way as the nation’s navy in the South China Sea. China’s coastguard fleet of large patrol ships has more than doubled to more than 130 in the past nine years, making it the largest coastguard force in the world. China considers at least 80 per cent of the South China Sea to be its sovereign territory, a claim disputed by other regional powers.

Earlier this year US Secretary of State Mike Pompeo suggested that China was blocking energy development in the South China Sea through “coercive means”, preventing Southeast Asian countries from accessing more than $2.5 trillion in recoverable energy reserves. Addressing a meet of the top energy firm executives and oil ministers in Houston, Texas, Pompeo had criticised “China’s illegal island building in international waterways”, insisting that it was not “simply a security matter”.

“In May 2018, China quietly installed anti-ship cruise missiles and surface-to-air missilesystems on three of its fortified outposts west of the Philippines in the South China Sea, a move that allows Beijing to further project its power in the hotly disputed water,” according to a report in CNBC.com

But in the words of Chinese Foreign Minister Wang Yi China is accelerating efforts to reach an agreement with the 10 countries of the Association of Southeast Asian Nations to avoid conflicts over the South China Sea. Asean and China agreed at their summit in Singapore last November to the early conclusion of a code of conduct (COC) for the South China Sea. The code will set out norms of behaviour in the contested waters. Asean and China have been working to fully implement the Declaration on the Conduct of Parties, the precursor to the COC, since 2002. Negotiations in on the COC began in March last year, following the adoption in 2017 of the framework for the COC.

“…Association of Southeast Asian Nations (ASEAN) Summit, held in Bangkok, demonstrated a positive spirit among ASEAN members, but failed to yield substantial progress over a Code of Conduct (COC) regulating actions in the South China Sea. A single draft of the COC was first put forth in August 2018, with an agreement reached in November 2018 by China and ASEAN to finalize the COC within three years, starting from 2019. Negotiations over the COC have proven difficult for several reasons, according to Carl Thayer, an emeritus professor at the University of New South Wales in Australia. Thayer sees four areas as problematic: the undefined geographic scope of the South China Sea; disagreement over dispute settlement mechanisms; different approaches to conflict management (self-restraint, mutual trust, and confidence building); and the undefined legal status of the COC,” writes Nguyen Minh Quang in an article titled Saving the China-ASEAN South China Sea Code of Conduct in The Diplomat.

Vietnam, as the upcoming 2020 ASEAN Chair, will need to focus more on laying the foundation and harmonizing standards for consensus and unity building in ASEAN. To that end, the adoption of the “ASEAN minus X” formula is worth considering, suggests Nguyen Minh Quang (is a researcher at Can Tho University and co-founder of the Mekong Environment Forum). He further explains, “In the absence of a legally-binding mechanism in the South China Sea, ASEAN will have to further upgrade relations with external powers, in part due to the desire to lesson political and economic dependence on China and in part due to worries about China’s massive expansion in the region. But the foremost thing ASEAN needs is greater self-reliance, which requires substantial unity and a new approach to the consensus-based decision-making process. Self-reliance empowers ASEAN to protect its collective values and peoples without compromising the ASEAN Community for individual members’ own national interests.”
Military moves by China pose threat to Freedom of Navigation and Freedom for Overflight in SCS. Experts across the world have been repeatedly urging China to uphold UNCLOS in settling SCS disputes. It is important to recall 2016 UNCLOS verdict which went against Chinese claims.

China should stop building floating Nuclear factories in SCS that affect to environment & security in SCS, experts said, adding, US and other powers should continue to patrol FONOP in SCS.