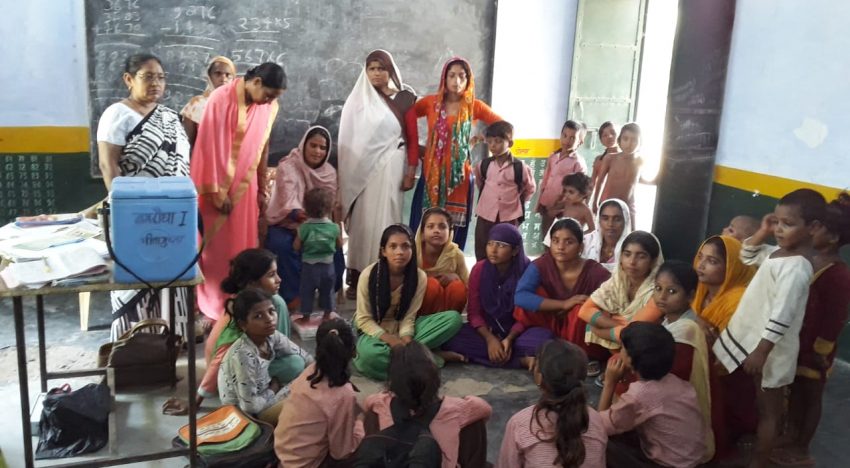 In Delwara 14 youths, three girls and 11 boys, are learning about money management, the importance of saving and are finding their voices in the community through Seva Mandir’s Child Savings Club.

The club is Seva Mandir’s first self-help group in Delwara (located 28 km from Udaipur) which both benefits children and is run by children. It operates like a small bank: members deposit money into their accounts and can borrow money when needed.

Members can borrow up to three times the balance of their accounts in normal circumstances. In urgent or emergency situations, such as medical issues, the club can vote to allow for larger loans.

Several months ago, savings club member Dilip Bhoi, 18, borrowed INR 5,000 to purchase fruits and vegetables for his part time work as a fruit seller. The XII standard student sells from a stand he borrowed from his father and said thanks to the loan he was able to order to purchase a season’s worth of vegetables.

Bhoi earns around 6,000 to INR 7,000 a month from his stand, which is more than enough to pay the club’s INR 545 a month payments (500 towards the loan and 45 interest payment) and put some away in savings. “By now I have saved enough for the next season and I don’t think I need to borrow again,” Bhoi said.

Unlike a traditional bank Bhoi’s interest payments are not pocketed by the institution, but instead divided between the members. Shambhu Khatik, head of Seva Mandir’s Youth Resource Center (YRC) in Delwara which supports the club, explains: “The YRC does not take a penny from it,” Khatik said. “If anyone takes a loan, the interest is (divided between the members and) deposited to each and every member of the club (including the person who borrowed).

Club members are also required to grow their savings by depositing INR 100 into their accounts each month with a penalty of INR 5 for failing to deposit. Members can make the deposit at the club’s monthly meetings which occur on the 10th of every month. Khatik said the meetings are a good opportunity for the youth to come together and discuss their problems collectively.

At one meeting members asked for help in getting sports equipment for a local school which didn’t have any. They said that school officials were not listening to the students complaints and they were unsure of what to do. The club assisted in setting up meetings between club members and citizens of Delwara to intervene with the school. Members of the club also worked with Seva Mandir to successful petition a donation from a large company to cover the costs of purchasing sports equipment.

Khatik credits the club’s success in finding problems and addressing them to its openness: all group members are treated equally and discrimination of caste is not allowed in the group.

Saving Club Treasurer Sanita Mali, 15, agrees with Khatik. “All are equal in this club. I don’t feel uncomfortable sitting among boys. Boys also don’t trouble me since I am in position of power over them,” Mali said.

Mali is in XII standard and accounting is her main subject. She said the work has helped her understand her studies better. “This is a good opportunity for me to apply theory into practice,” Mali said. “No one was ready to take this position so I came forward. I won by the majority of votes. This is huge responsibility to handle all the money. I will have to put money from my pocket if there is any discrepancy.”

Despite the liability she says she feels happy with her position and says she likes that members trust her and deposit their money to her.

His current task is a membership drive. “As a president I aim to make our group larger. I invite children of the community to join us, make them understand how this group will benefit them,” Mali said.

Seva Mandir runs 48 women’s groups in Udaipur suburbs to give ‘grassroots leaders the unity, confidence, and authority to redress individual cases of abuse and discrimination. They also work in close partnership with men on the longer process of rewriting biased gender norms and including women within the institutions governing society. At the same time, 573 savings and credit groups give women economic security and independence.’

Seva Mandir also works closely with the schemes of government- SGSY, NABARD AND NRLM. They make people aware in the villages about these programs and encourage them to take benefit from it. And not just the schemes, they also help the unregistered SHGs and keep contributing in the common fund of people just in case they need it.