In 1960, Capt Pratap Singh was born in Basai Darapur, New Delhi. Before entering the Indian Army, he studied English literature at Hansraj College in Delhi. His father had served in the Indian Army during WWII and had received several honours. His two older brothers both served in the military, one in the Indian Air Force and the other commanding an AD unit in the Army. 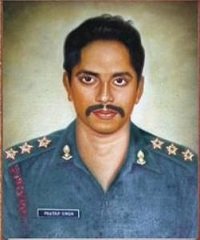 Capt Pratap Singh was an Observation Post Officer at Sonam outpost in Siachen in 1988. The opponent made numerous attempts to recapture a crucial position critical to the defence of Siachen soon after he was ordered to defend the Bana station. Our alert soldiers repelled these efforts. On May 9, 1988, the enemy commando force attacked again, this time utilising ropes and ladders on the ice wall below the position. This attack was repulsed. The adversary’s ropes and ladder system remained in place, allowing them to utilise it again in future efforts to seize the post. To avoid new attacks, the fastened ropes had to be removed and the ladder unfixed.

On May 18, 1988, 2LT Ashok Chaudhry reached and cut two of the four ropes. Forcing the last two fixed ropes to be cut and the ladder unfixed. Captain Pratap Singh completed this operation with a jawan descending the ice wall. When Capt Pratap Singh arrived, he found a considerable quantity of ammo and grenades near the ropes’ head. A grenade booby trap burst while he was inspecting them, injuring his right arm and chest. Despite his injuries, the gallant cop crept forward to cut the set ropes with his knife. Then he unbolted the ladder and let it slide down the ice. The brave cop returned to his position but fell and died from his injuries. Capt Pratap Singh sacrificed his life to eliminate a major threat to a critical station in Siachen.

Captain Pratap Singh was deployed as an observation post officer Siachen area in April 1985. The adversary made repeated attempts to retake a key post vital for our defences of Siachen, without success. Their last attempt to take a post was on 9th May, 1988, when they fixed four ropes and a ladder-system on the ice-wall below the post for the purposes. This attack was successfully beaten back by our forces. The ropes and the ladder-system fixed by the adversary, however, remained in position, making it possible for them to use it again in their fresh attempts to take the post. It was imperative that the fixed ropes were cut and the ladder unfixed to prevent fresh attempts. On the 18th May, 1988, Second-Lieutenant Ashok Choudhary was able to reach and cut four of the ropes.

On the 26th May, 1988, it was decided to cut the remaining two ropes and unfix the ladder. Captain Pratap Singh undertook this mission with the help of a jawan, descending the ice wall. On reaching the location, Captain Pratap Singh found a large quantity of ammunition and grenades lying at the head of the ropes. While examining the same, a grenade booby-trapped him, severely wounding his right arm and chest. Despite being badly wounded the brave officer crawled forward to the fixed ropes and cut them with his knife. Then he unfixed the ladder system and let it fall down the ice wall. Then the gallant officer inched back to his own rope to come up the ice wall to return to the post, but collapsed due to his severe wounds and made the supreme sacrifice of his life for the nation.

Captain Pratap Singh thus displayed conspicuous gallantry in eliminating a great threat to a key post of our vital defence of Siachen Glacier at the cost of his life.