Captain Gurjinder Singh Suri was born on July 4, 1974 in Ambala, Haryana. Capt Gurjinder was the younger brother of Lt Col T P Singh and Smt Surjit Kaur. His grandpa, Subedar Gurbaksh Singh, served in the military during WWII, 1947-48, and 1962. His father, Lt Col TP Singh Suri, served with the Sikh Light Infantry in the Naushera region of Jammu and Kashmir in 1971. 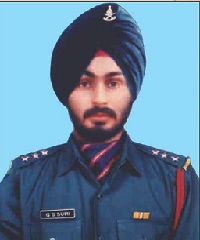 For anti-terrorist operations in J&K, Capt Gurjinder Singh was assigned to 12 Bihar (On Attachment) in 1999. In the front guarded region in Jammu & Kashmir, Captain Gurjinder led the Ghatak platoon on the Faulad position. After a massive artillery barrage, Pakistani troops attacked the position on November 9, 1999. In response to any reinforcements or hindrance from the enemy, Capt Gurjinder deployed his soldiers. Then he and his companions began clearing enemy bunkers one by one, and one of his men was severely hurt.

Captain Gurjinder, leading from the front, killed two enemy soldiers and silenced their machine gun. Capt Gurjinder was shot in the arm during the procedure. Disregarding his wounds, he led his troops into a bunker and threw two hand grenades in Then he entered the bunker and killed another hostile soldier with his guns. Here, he was badly injured by an opposing RPG. His injuries didn’t stop him from inspiring his soldiers till he died. Captain Suri, aged 25, was slain for his country’s sake.