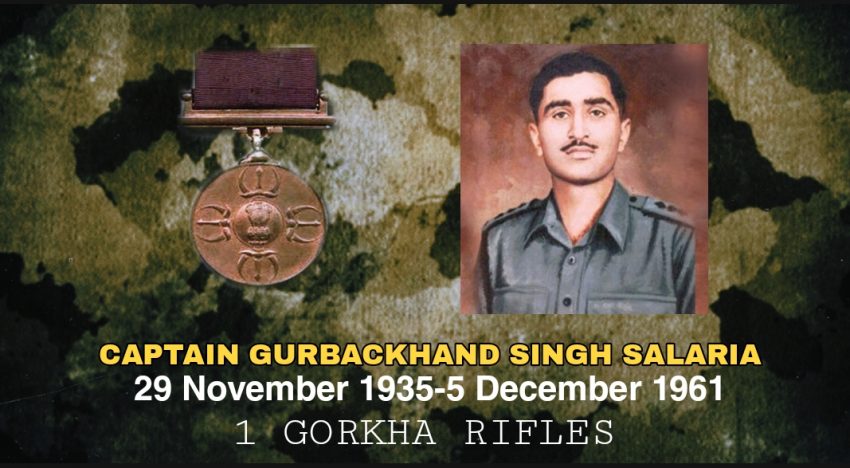 Captain Gurbachan Singh Salaria, PVC (29 November 1935 – 5 December 1961) was an Indian Army officer who served as a part of a United Nations peacekeeping mission in the Philippines. Singh was a graduate of the King George’s Royal Indian Military College as well as the National Defence Academy in New Delhi, India. As the first and only NDA alumnus to receive the Param Vir Chakra (PVC), India’s highest wartime military medal, he is also the only UN Peacekeeper to receive the honour.

In December 1961, Salaria was among the Indian troops deployed to the Republic of the Congo as part of the United Nations Operation in the Congo. On 5 December, Salaria’s battalion was tasked to clear a roadblock of two armoured cars manned by 150 gendarmes of the secessionist State of Katanga on the way to the Elizabethville Airport. The plan was that Salaria and his men were to block their retreat. His rocket launcher team attacked and destroyed the Katangese armoured cars. This unforeseen move confused the gendarmerie, and Salaria felt it would be best to attack before they reorganised. Though his troops were badly outnumbered, they charged towards the Katangese and killed 40 men in a kukri assault. During the attack, Salaria was shot twice in the neck and eventually succumbed to his injuries. The remaining gendarmes fled in utter confusion leaving their dead and wounded behind. This helped the main battalion to easily overrun the Katangese and clear the roadblock. For his duty and courage, and disregard for his own safety during the battle, Salaria was awarded the PVC.

Early life and education
Gurbachan Singh Salaria was born on 29 November 1935, in Jamwal, a village near Shakargarh, Punjab, British India (now in Pakistan). He was the second of five children of Munshi Ram and Dhan Devi.His father had earlier been drafted into the Dogra Squadron of the Hodson’s Horse regiment in the British Indian Army. He was a member of the Saini caste and an adherent to Sikhism. Listening to tales of his father and his regiment motivated Salaria to join the army at a very young age.

As a result of the partition of India, Salaria’s family moved to the Indian part of Punjab and settled in Jangal village in Gurdaspur district. Salaria enrolled in the local village school. He was not very attentive to his studies and spent much of his time playing kabaddi. In July 1946 he applied for admission into the King George’s Royal Indian Military College in Bangalore. Though he passed the entrance exam, he failed the medical exam because his chest was too small. Salaria spent the following weeks exercising and when he applied again in August he met the requirements and was admitted into the college. In August 1947, he was transferred to the KGRIMC in Jalandhar. After passing out from KGRIMC, he joined the Joint Services Wing of the National Defence Academy (NDA). On graduating from the NDA in 1956, he enrolled in the Indian Military Academy, completing his studies on 9 June 1957. Salaria was initially commissioned into the 2nd battalion, 3 Gorkha Rifles, but was later transferred to the 3rd battalion, 1 Gorkha Rifles in March 1960.

Indian troops have taken part in some of the most difficult operations and suffered casualties in the service of the UN. Their most significant contribution has been to maintenance of peace and stability in Africa and Asia.
In furthering the practices of the United Nations, our officers and men faced many hazards in the Congo, especially in Katanga. Capt Gurbachan Singh Salaria won a Param Vir Chakra for displaying indomitable courage and leadership skills in the operations in Congo.

On 5 December 1961, the 3/1 Gorkha Rifles were sent to remove a roadblock set up by the gendarmerie at a crucial junction in Elizabethville, Katanga. The plan was for one company to attack the position frontally with two Swedish armoured cars, while Captain Gurbachan Singh Salaria would approach from the airstrip with two sections of Gorkhas and two Swedish armoured personnel carriers to operate as a cutting-off force. At about 1312 hours on 5 December 1961, Captain Salaria and his small unit arrived at a distance of 1500 yards from the roadblock and came under intense automatic and small-arms fire from an undiscovered enemy position dug in on his right flank. Additionally, the enemy fielded two armoured cars and around 90 soldiers in opposition to Captain Salaria’s tiny force. Captain Salaria, cognizant of the fact that he had encountered a secondary roadblock and ambush and that this enemy force may strengthen the strategic roundabout, jeopardising the main operation, chose to eliminate this opposition. He spearheaded an attack with bayonets, khukris, and grenades, aided by a rocket launcher. Captain Salaria killed 40 adversaries and destroyed two armoured cars in this valiant combat. This unexpectedly aggressive attack utterly demoralised the adversary, who retreated despite their numerical advantage and fortified fortifications. Captain Salaria was shot in the neck by an automatic weapon burst but fought on until he succumbed from profuse bleeding. Captain Salaria’s valiant effort halted any enemy advance into the main combat scene, therefore ensuring the success of the main battalion’s assault at the roundabout and preventing the encirclement of UN Headquarters in Elizabethville. Captain Salaria died as a result of his wounds.