Brigadier Manjit Singh Minhas, MVC was an officer of the Indian Army, who served with the Mahar Regiment and the 11 Jammu and Kashmir Light Infantry. He was awarded the Maha Vir Chakra, India’s second highest award for gallantry in the face of the enemy, during Operation Pawan 1987 in Sri Lanka.

Brigadier Manjit Singh Minhas was born in Hoshiarpur district, Punjab, India and studied at the Khalsa College, Amritsar. He came from a military family, with his father and two brothers al 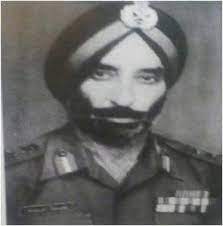 so having served in the Indian Army.

On the 17th of December, 1961, Brigadier Manjit Singh was commissioned into the Mahar Regiment and then moved to the 11 JAK LI. During Operation Pawan in October 1987, he led the 41 Brigade, which was one of the forces charged with capturing Jaffna from the terrorist group LTTE. The operation was marked by fierce combat and a high number of deaths. Despite the fact that the LTTE militants were making all-out and extremely violent measures to halt their progress, Brigadier Manjit Singh’s Brigade was entrusted with creating a link between Jaffna Fort and its surrounding areas. With just two companies of Rajput Rifles under his command, he was directly in charge of the leading forces. He was able to break through the LTTE militants’ perimeter and establish a communication contact with the Para Commandos based out of Jaffna Fort, allowing him to escape capture. He was decorated with the Maha Vir Chakra in recognition of his bravery and leadership.

Within hours of assuming command of an Infantry Brigade in Sri Lanka as part of the Indian Peace Keeping Force, Brigadier Manjit Singh was tasked to establish a link-up with Jaffna Fort, along Western Pincer in the face of all-out efforts by the militants to thwart their advance. Brigadier Manjit Singh himself assumed charge of the leading elements. With just two companies of Rajput Rifles, he broke through the desperate cordon of the militants, and successfully established a link-up with para commandos operating from Jaffna Fort. His leadership and demonstration of personal valour in the face of grave danger so motivated his command, that the whole Brigade was suddenly filled with elan and moved purposefully forward.