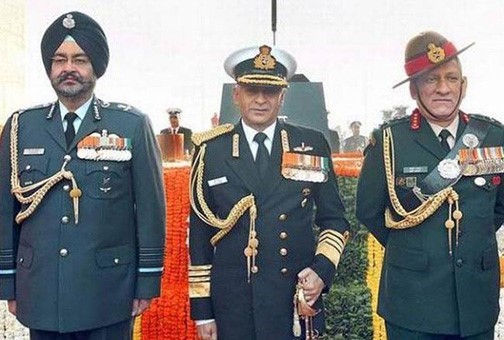 In a landmark military reform by the Government PM Modi in his Independence Day speech on August 15 announced that the country will have a chief of defence staff (CDS) to bring synergy in functioning of the Army, Navy and IAF.

Top commanders of the Army on Wednesday deliberated on creating arrangements and structures to bring synergy in operational functioning with the Navy and Air Force following Prime Minister Narendra Modi s  policy directive for tri-services coordination two months ago.

At present, each service works under provisions of individual Act passed by Parliament.

The commanders also decided to roll out at the earliest new training module at different levels to include various operational dimensions like space warfare and artificial intelligence.

As part of the training, the Army commanders have decided to focus on rolling out ‘honour code’ in officers training academies to instill moral and ethical standards wherein individual cadets are trained to behave as desired as per service ethos of the force, sources said.

In case of aberrations, there will be a self-correcting mechanism. The system of honour code was discussed in details which has been compared with international academies and it has been decided to roll it out, the sources said.

On enhancing coordination with the Navy and the Indian Air Force, the sources said the commanders discussed about creating arrangements and structures to achieve the goal of “jointmanship”.

In a landmark military reform, Modi in his Independence Day speech on August 15 announced that the country will have a chief of defence staff (CDS) to bring synergy in functioning of the Army, Navy and Air Force.

The government has began work on creating the CDS by January next year.

The commanders, as part of a six-day deliberations from Monday, also discussed ongoing restructuring of the Army headquarters following some approvals accorded by the government.

Sources said it has been decided at the Army Commanders’ Conference that restructuring in totality will commence on receiving “full sanction” by the government to the proposals which were aimed at making the army leaner and meaner as well as to enhance its combat capabilities.

Modi also discussed need for enhancing training in the Army.

With changing spectrum of war and conflicts, the ACC discussed in detail to adopt various dimensions of training like space, artificial intelligence, much-upgraded military education, the sources said.

The scope of training on these aspects is planned at different levels and shall be rolled out at earliest, they said.

The commanders also reviewed the operational preparedness of the Army in dealing with all possible security challenges and felt that the artillery ammunition inventory, particularly the precision guided munitions, in the formations guarding sensitive border areas needs to be enhanced.

Recently, 155MM excalibur artillery ammunition from US has arrived which can be fired at extended ranges, the sources said.

They said 155mm Dhanush towed gun system is under induction, adding it is going to qualitatively improve firepower of Indian artillery.

The commanders were also apprised about roll out of the Officers Automated Structured Information System (OASIS) for full automation of service records of officers. OASIS has been hosted on Army Intranet and has details of every officer’s data from pre-commissioning to retirement.

The commanders also discussed the issue of non-empanelled officers and felt that the reason for not being empanelled was not due to lack of merit but because of lack of vacancy in select ranks.

It was decided that more number of non-empanelled officers now will be selected for foreign missions as well as for UN tenures, sources said.

All opportunities shall be provided to these officers for meeting their personal and professional aspirations, they said.

The commanders also discussed the long-pending proposal of granting pension to Emergency Commission officers who had actively participated in the 1965 and 1971 wars.

Sources said the Army headquarter will respond to the Defence Ministry’s communication to its earlier proposal to grant pension to Emergency Commission officers who were part of the two wars.

The issue of granting ex-servicemen status to military nursing officer also figured in the deliberations.

Such a status shall help them with certain privileges which are not available today. Army headquarters is pursuing the case in a faster manner, the sources said.