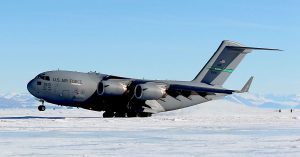 With India’s growing status as a global power, comes the need for its military to demonstrate its presence far and wide.

Since being commissioned by the IAF in 2013, the C-17 has airlifted troops, supplies, heavy vehicles, civilians, humanitarian aid etc. anywhere and everywhere. We explain.

Service ::
C-17 is deployed by nearly a dozen countries
The C-17 was developed to meet the US Air Force’s (USAF) requirements for heavy-lift transport aircraft to replace the venerable C-130J Hercules plane.

The rest are operated by the UK, Australia, Canada, Kuwait, Qatar, India, and others.

Capacity ::
C-17 can carry a staggering 70-tons of cargo
The C-17 has the capability to lift loads of over 70-tons, nearly twice as much as IAF’s Russian built Ilyushin IL-76 transport aircraft.

It can operate in runways just 3,000-ft long and 90-ft wide. It can also take-off and land on unpaved runways.

The C-17 can cover a 4,400-km distance while carrying 72-ton load. Its range can be increased by in-flight refuelling.

Cargo ::
It can carry helicopters, tanks, paratroopers and more!
The C-17’s cargo compartment can be easily customized to carry different kinds of loads.

It can also carry Apache attack helicopters and seat over 100 passengers.

Through its Container Delivery System, it can airdrop 40 containers (weighing one-ton each) or 102 battle ready paratroopers. 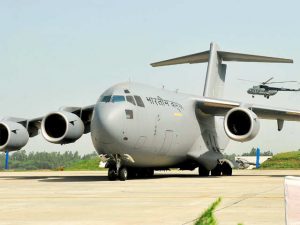 Saving Lives ::
India’s C-17s have saved lives across the region
The IAF has deployed C-17 to transport supplies to high-altitude landing grounds in Leh and the distant Andaman Island of Port Blair.

The C-17s have rescued Indian expats during the Yemeni Civil War in 2015.

It has delivered humanitarian aid after the 2013 Cyclone Phailin, 2015 Nepal earthquake, 2015 Kashmir and Chennai floods, 2016 Sri Lanka floods, and other natural disasters.