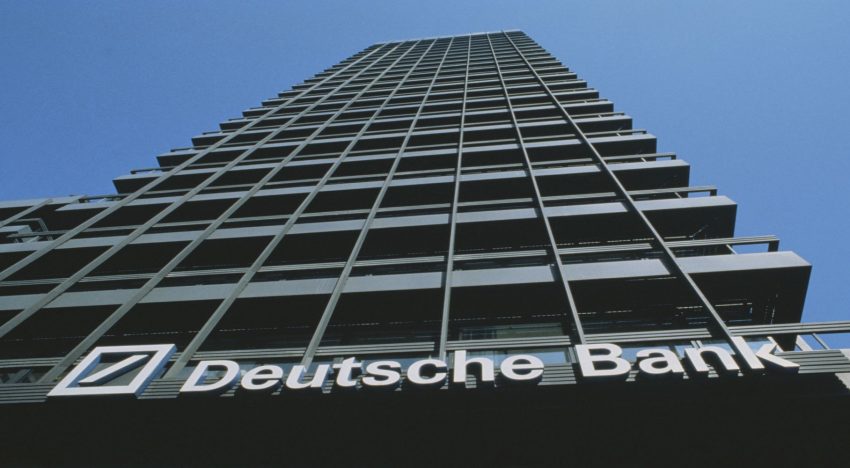 At the heart of Chief Executive Officer Christian Sewing’s turnaround plan for Deutsche Bank AG is a contrarian bet: that he can cut spending on technology while gaining ground on the competition.

Even with the digital revolution in finance accelerating, Deutsche Bank expects to trim its annual outlays on tech to 2.9 billion euros ($3.3 billion) in 2022 from a peak of 4.2 billion euros this year.

“Deutsche Bank would probably love to be spending more on technology, but they need money for other parts of their restructuring,” said Pierre Drach, managing director of Independent Research in Frankfurt. “It’s pretty much impossible for European banks to catch up with the Americans at this stage.”

Sewing’s team says it’s made progress in fixing information networks that his predecessor called “antiquated and inadequate.” Years of expansion left it with systems that couldn’t communicate with each other and didn’t adequately track its business. The bank, which has spent almost $18.5 billion on legal settlements and fines since 2008, has also suggested that the past breakdown in controls stemmed in part from weak systems.

The 4.2 billion euros Deutsche Bank has budgeted this year to maintain and modernize its systems represents a fraction of the $11.5 billion JPMorgan Chase & Co. shells out. ‘You have to spend to win’ with new technologies, Jamie Dimon, the bank’s CEO, said Tuesday.

The gap is set to widen as the German chief executive wants to cut technology costs by almost a quarter. European banks, meanwhile, are forecast to increase tech spending at a 4.8% annual rate through 2022, according to the consulting firm Celent.

“We continue to invest in IT to serve clients better, become safer, more efficient and better controlled,” Senthuran Shanmugasivam, a Deutsche Bank spokesman, said in response to questions from Bloomberg. “Despite our smaller footprint, our investment plans in 2019 are broadly unchanged as we reallocate resources to our core businesses.”

It’s all part of a retrenchment Sewing announced last week to exit equities sales and trading and eliminate 18,000 jobs. Deutsche Bank aims to cut adjusted costs to 17 billion euros in 2022 from 22.8 billion euros last year; the share of technology expenses would remain stable over that time period.

The company can modernize systems while spending less, for example by moving most of its applications to the cloud, according to Frank Kuhnke, who oversees its technology. He said Deutsche Bank has already cut the cost of crunching data by more than 30% since 2016 even as it increased computing capacity by about 12% a year to meet regulatory demands.

The CEO has brought in new talent to do that. Bernd Leukert, who left the management board of software company SAP SE earlier this year, will start in September. Neal Pawar will join as chief information officer from AQR Capital Management the same month.

Hiring outsiders hasn’t been a panacea in the past. Kim Hammonds, a former Boeing Co. executive, spent about four and a half years rebuilding the bank’s systems only to be ousted in 2018 after reportedly calling the bank “the most dysfunctional company” she’d ever worked for.

Deutsche Bank expects its retrenchment from businesses to allow it to focus on its core operations. It will also save about 300 million euros by 2022 by shedding almost 5,000 external IT contractors and replacing them with internal staff at a lower cost. The integration of consumer lender Postbank will avoid duplication of expenses.

A three-year initiative announced in 2012 failed to stop technology spending from ballooning 44% by 2015. That was the year that then-CEO John Cryan said he would reduce the number of operating systems from 45 to four in 2020. Deutsche Bank still has 26, Sewing told investors in May. He kept the goal of eventually cutting them to four, but says the lender will need to run 10 to 15 systems for the foreseeable future.

“Everyone knows that Deutsche Bank’s systems are a mess and I think they will have to end up spending more,” said Drach. “The fact that their new technology head hasn’t come on board yet gives them a good narrative for increasing the ultimate amount.”